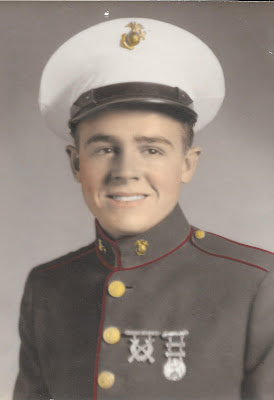 On Memorial Day in 2013, I wrote a tribute piece in memory of PFC Cecil Ray Pennycuff of Albany, KY, who was killed in action at Iwo Jima on February 23, 1945. I wrote it after reading the words his cousin, Jim Pennycuff, wrote in a Facebook post.

"I placed an American flag today on the grave of my cousin Cecil Ray Pennycuff. Each year I do this and always feel that I'm standing on sacred ground in the presence of a hero. God bless those soldiers that paid the supreme sacrifice."

Six years later, Jim came into possession, for the first time, a photograph of PFC. Pennycuff, which I have included in this re-write.

PFC. Cecil Pennycuff was a member of Company A, 2nd Bn, 21 Marines, 3rd Marine Division. For the Battle of Iwo Jima, the 3rd Marine Division was initially in reserve for the battle, however, they were committed one regiment at a time as the initial regiments that landed needed to be relieved. The 21st Marines came ashore on February 20th. The 21st fought on Iwo Jima until the end of organized resistance on March 16th and the subsequent mopping up operations for the next month. The fighting on Iwo Jima would cost the 3rd Marine Division 1,131 killed in action and another 4,438 wounded.

All total, in 36 days of fighting, 6,800 American troops were killed or wounded, and virtually all 22,000 Japanese soldiers perished.

Cecil Ray Pennycuff was the son of Herschel Ray and Cora Tuggle Pennycuff. He was born on October 3, 1924 in Clinton County, Kentucky.

"God bless those soldiers that paid the supreme sacrifice."