This Memorial Day, the Notorious Meddler salutes Robert Higginbotham of Albany, KY who served as Captain of the 5th KY Cavalry, US Army during the Civil War.

The 5th Kentucky Volunteer Cavalry Regiment served in the Union Army was organized at Columbia, Kentucky beginning on December 1861 and remained in that area until February 1862. The troops were mustered in for a three year enlistment at Gallatin, Tennessee on March 31, 1862 under the command of Colonel David Rice Haggard. The 5th Kentucky Calvary saw action in the Kentucky Campaign, the Battle of Chickamauga, the Atlanta Campaign, the Battle of Resaca, the Siege of Atlanta, the Battle of Jonesboro, the Battle of Lovejoy's Station, Sherman's March to the Sea, the Battle of Griswoldville, the Carolina's Campaign and the Battle of Bentonville before being mustered out of service on May 3, 1865. The regiment lost a total of 213 men during service. Four officers and 32 enlisted men were either killed or mortally wounded, while five officers and 172 enlisted men died of disease.

Robert Higginbotham's great-great-grandson, Lynn McWhorter, said Robert raised several boys and that all of their names included the middle initial 'L.' When asked why he did that, Robert said that it stood for 'Lazy.' Obviously, he was a man of great humor. Today, Lynn is very blessed to have most of Robert Higginbotham's correspondence from his Civil War days. 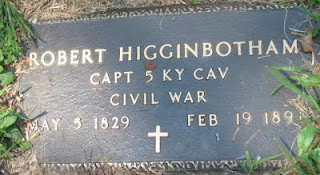