The Law and Prohibition 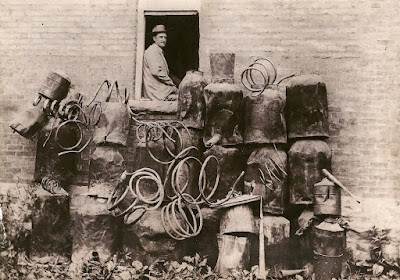 Things aren't always as they seem. Consider this story that appeared in the Louisville Courier-Journal's "Greetings" column on Feb. 20, 1959, as told by Charles Brents. The actual incident occured sometime between 1926 and 1929, when my great-grandfather, A.H. "Hige" Boles, was sheriff of Clinton County, Kentucky.

When Prohibition went into effect in 1920, millions of otherwise law-abiding Americans chose to violate the liquor ban to satisfy their thirst for booze. Such was the case in Clinton County, which like all other places, thrived in the production and sale of illicit alcohol, such as moonshine.

As you can see in the photo, busting moonshine stills kept my great-grandfather busy during his term as sheriff. According to Brents, during one raid, Hige and his deputies found three men, one of whom was a constable who said, "Sheriff, you are too late. I have already captured these two fellows." While both men were convicted and fined $50 each, it was later learned that the constable had been a third partner in the still. His quick thinking had saved him from arrest and punishment.