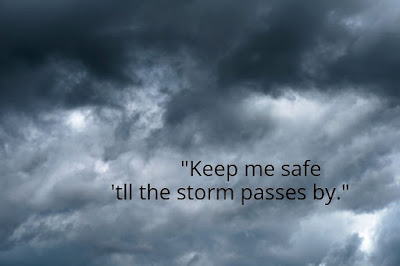 I was awakened by the thunderstorm that passed through the area during the wee hours this morning. Thankfully, as soon as the winds ceased I was able to go back to sleep. Later, I noticed on Facebook that my friend, Darrell, had posted the words to the chorus of the Mosie Lister song, "Til The Storm Passes By."

Lister wrote the song in 1958, perhaps inspired by the story found in the Bible, in the book of Mark, where Jesus was with His disciples in a boat when a vicious storm hit them. Chapter 4, verse 39 says, "And he arose, and rebuked the wind, and said unto the sea, Peace, be still. And the wind ceased, and there was a great calm."

Perhaps he was thinking about John Wesley’s famous storm experience aboard a ship heading toward America in 1735. He and his brother, Charles, were with a group of Moravian immigrants from Germant, who were in the middle of a worship service when the storm hit. John wrote, "the sea broke over, split the main sail in pieces, covered the ship and poured in between the decks, as if the great deep had already swallowed us up." While the storm was boisterous, the Moravians continued to sing, while the English people on board were terrified.

Although it never reached her, Lister intended for the song to be recorded by Mahalia Jackson. From his own background of having grown up among minority groups, he had an idea of Jackson's background and wanted to write a song that would be a prayer for a person who has undergone struggles in life. The reality is struggles go hand in hand with most of us, who are always either in a storm, like the current global Covid-19 pandemic, have been in a storm, or are heading toward a storm. Thankfully, Jesus promised He would never leave us nor forsake us, and He hasn't, and He won't. He is holding us fast as we stand in the hollow of His hand.


"In the dark of the midnight
Have I oft hid my face
While the storm howls above me
And there's no hiding place
'Mid the crash of the thunder
Precious Lord, hear my cry
Keep me safe 'til the storm passes by

When the long night has ended
And the storms come no more
Let me stand in Thy presence
On that bright, peaceful shore
In that land where the tempest
Never comes, Lord may I
Dwell with Thee
When the storm passes by"