The lingering mournful notes of taps sounded that day in 1950, when an unsung hero of WW1, a man who had fought with Sgt. York in the action that had thrilled a nation, was laid to rest in Pennsylvania. An invalid from wounds he recieved in a subsequent battle, George H. BosIey had been a member of Company G, 328th Infantry the day Sgt. York used a machine gun to pick off Germans who were annihilating his company and then marched 132 prisoners back to American lines, earning the Pall Mall, Tennessee man the adulation of a nation, a Congressional Medal of Honor, some financial reward and, in 1941, a motion picture about his life.

Bosley always said that Alvin C. York earned all he ever got through his coolness and heroism in that 'No Mans Land battle,' but he never stood for a movement in the limelight, himself. All he would ever say was, "I was there, I saw it happen." But sadly, as fate would have it, on Oct. 14, 1918, six days after Sgt. York's heroic deed, shrapnel pierced Bosley's helmet, taking out his left eye and part of his head, and making him an invalid for the rest of his life. He woke up in an Army hospital five weeks later. By the time he was shipped home, heroes were plentiful, so he quietly took up life in the small Pennsylvania town of West Newton and that day with Sgt. York became just a memory. Unable to work steadily, a small pension helped him rear his family.

After Warner Brothers decided to film it's Sgt. York movie, efforts were made to find all of the men who had been with the heroic sharpshooter in the fight against the enemy. They found all but one - George Bosley. Yet, in one of the scenes in the movie, a prisoner throws a hand grenade that wounds one of Sgt. York's companions. That companion was Bosley. The grenade wounded him on the nose and cheek. For his heroism, this forgotten man of a great incident of American battle history was awarded the Distinguished Service Cross, the Croix de Guerre and a Purple Heart. 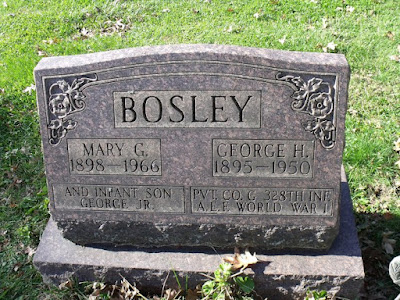