"Little birds are flying daily
Over the grave of the one I love
Singing songs so sweet and gaily
Songs God gave them from above
To the memory of my loved one
Who lies sleeping in a cold grave
Who was called away so suddenly
Though it was our Master's will
Norman, you are sweetly sleeping
No more trouble, no more pain
You have not gone away to forget me
And our meeting will be so great
You are sure to be with Jesus
Waiting for me at the gate"

Frances Pierce Groce of Albany wrote this beautiful poem in memory of her only son, Pvt. Norman Johnson Pierce, who was killed in action in France on Nov. 16, 1944, while serving with the 313th Infantry of the 79th Division.

Pvt. Pierce, who was 27 years old at the time, is buried at the American Cemetery and Memorial in Epinal, France, which contains the graves of 5,252 of our military dead, most of whom lost their lives in the campaigns across northeastern France to the Rhine River and beyond into Germany.

In the years following his death, usually near the anniversary of it, Mrs. Groce would publish a poem or a memory of her son in the Clinton County News. This poem, which I titled, "Sweetly Sleeping," was published the week of Nov. 16, 1958. Pvt. Pierce was the son of Prentice Pierce, sometimes Peercy. 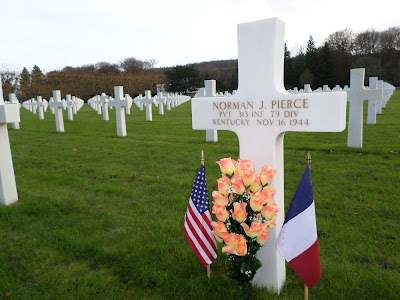