The Phonograph With A Soul

Thomas Edison began developing a disc phonograph player and discs after cylinders peaked in popularity in 1905. His aim was to produce a superior-sounding disc that would outperform rivals RCA and Columbia. Edison's phonograph and discs were designed to be an entire system, incompatible with other discs or disc players. The phonographs and discs were touted as being acoustically better than RCA and Columbia. Edison claimed that his records could be played 1,000 times without wear.

Here is a photograph of my 1918 Edison Disc Phonograph. Design of this H-19 Hepplewhite model began at the end of World War I. It was unveiled at a trade show in Detroit in March of 1919. The initial price was $155, but the price gradually rose to $167.50. Models were made until 1922 and unsold H19 models were still available as late as 1927.

My phonograph was originally purchased at Drennen Piano Company in Orlando, Florida between 1919 and 1927. One day, as I was cleaning it, I discovered a shelf underneath the turntable, and on that shelf I found a small white half-filled jar of Edison Grease. Laying beside the jar was a black brush with the piano company's name and address printed on it. The Edison logo was also on the brush, along with the slogan, "The Phonograph With A Soul." 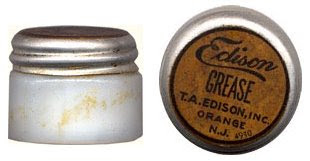