Remembering The Day The Music Died 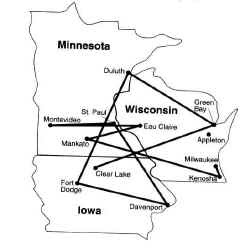 The temperatures across the country have been so cold the past several days and nights. Even areas that normally do not suffer from cold temperatures are or have experienced the coldness. It's January and for me, the cold weather only serves to remind me of the sad ending to one of the beginnings in rock and roll. I read on Facebook where my friend, Greg Martin of the Kentucky Headhunters, reported that the band was experiencing a layover in Rawlins, Wyoming, 1200 miles from home because their tour bus decided it wanted to quit. I shivered at the news, and in the coincidence that I was about to write a story based on the upcoming anniversary of the 1959 Winter Dance Party Tour, which was plagued by bus problems and the harsh winter weather, and changed the course of music history.  I thought about the Kentucky Headhunters predicament in Wyoming and I shivered some more.

The 1959 Winter Dance Party tour through the frigid Midwest was launched on January 23, 1959 at George Devine's Million Dollar Ballroom in Milwaukee, Wisconsin. Buddy Holly and the Crickets - Jerry Allison and J.B. Mauldin - had parted ways. Problems between the Crickets and their manager/producer, Norman Petty, had lead to a split in the group. They had been in New York for several weeks to get bigger exposure and to record there, but Allison and Mauldin were homesick. Buddy, on the other hand, wanted to stay in New York, where he could record. The dispute with Petty had resulted in royalty disputes and Buddy agreed to headline the winter tour to ease resulting cash flow problems. He replaced Allison and Mauldin with Waylon Jennings on bass, Tommy Allsup on guitar and Carl Bunch on drums. They were joined on the tour by Dion and the Belmonts, Ritchie Valens, the Big Bopper and Frankie Sardo.

The Winter Dance Party" was an absurd tour orchestrated by General Artists Corporation that was set to cover 24 Midwestern cities in three weeks. In temperatures several degrees below zero, the performers had to endure daily bus travels back and forth across Iowa, Minnesota and Wisconsin. GAC accepted any offer that came along and filled the dates regardless of the distance involved. They gave no consideration to the amount of travel, as the distance between venues was not a priority when scheduling each performance. For instance, the tour was in Wisconsin on the 24th, Minnesota on the 25th, back to Wisconsin on the 26th, back to Minnesota on the 27th and 28th, Iowa on the 29th and 30th, back to Minnesota on the 31st, and back to Wisconsin on Feb. 1st. Adding to the discomfort, the tour bus used to carry the musicians was ill-prepared for the weather; its heating system broke on the 30th. The bus completely broke down on the 31st. It broke down again the next day, Feb. 1st, just outside of Appleton, Wisconsin. A trucker had notified the sheriff's office in Appleton that a group of men, without hats, gloves or winter coats, was seen standing outside a stranded bus ten or fifteen miles south of town. One mile north of Pine Lake, the sheriff found the darkened bus on the roadside. Stepping inside with his flashlight the sheriff was greeted by a group of pale and sick young men, some huddled together under blankets. One person, Carl Bunch, couldn’t stand up. He was admitted to a hospital with frost bite on his feet. “Such lousy old buses,” Tommy Allsup would recall decades years later. “They weren’t really buses. They were jokes.”

The tour was scheduled to play two shows in Appleton, then have a day off to recuperate. But a show at Clear Lake, Iowa was added to the schedule. A different bus was brought in. On Feb. 2nd, on the way to Clear Lake, it broke down too. By the time, the performers arrived at Clear Lake, everyone was in a bad mood. Holly told Allsup and Jennings that after the show he was going to lease a plane from Jerry Dwyer's Flying Service to fly them to the next stop on the tour. The Big Bopper was sick and asked Jennings to let him have his seat, to which Jennings agreed. Valens asked Allsup for his seat. They flipped a coin and Valens won. So, Holly, Richardson and Valens got into the plane with pilot Roger Peterson. A few minutes after take off, Dwyer saw the lights of the Beechcraft Bonanza airplane start to descend from the sky to the ground instead of ascending. When the plane did not land at Fargo, North Dakota, a search was organized. The plane's wreckage was found the next morning in Albert Juhl's cornfield, eight miles from Clear Lake. Everyone on the plane was dead.

At the Jan 31st show, some 36-hours before Buddy Holly's death, 17-year-old Robert Zimmerman attended the Winter Dance Party show at the Armory in Duluth, Minnesota. Today, Robert Zimmerman is known to the world as Buddy Holly. In 1998, while accepting the Album of the Year award for his Time Out Of Mind, Dylan said, "...when I was sixteen or seventeen years old, I went to see Buddy Holly play at Duluth National Guard Armory and I was three feet away from him and he looked at me and I just have some sort of feeling that he was -- I don't know how or why-- but I know he was with us all the time we were making this record in some kind of way."

Greg Martin assured me that all was okay with the Kentucky Headhunters being stuck in Wyoming. I breathed easier when he said they were in an area with a hotel. He said, "God is good, it all works out for a reason. Hey, the sun is shining this morning, the skies are blue, that's good. Lord, thank you Sir!" I am glad he is thinking positive. Of course, this is 2010, not 1959. At last report, another bus was heading toward Wyoming to pick Greg and the boys up.

In the immortal words of Buddy Holly....Rave on!

By the way, Rave On!! is also the name of the third album released in 1993 by the Kentucky Headhunters for Mercury Records. The phrase is mentioned in the chorus of the song, Dixie Fried. Carl Perkins wrote that song, and it was Carl Perkins who said, "Buddy Holly may not have given birth to rock and roll, but he sure rocked the cradle."
at January 13, 2010