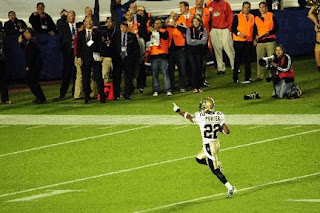 Last night, I cheered as the New Orleans Saints defeated the Indianapolis Colts in Superbowl XLIV.

It was a gutsy call to open the second half with that onside kick. Coach Sean Payton called the play during halftime, while The Who rocked on the field. But, what really rocked was Tracy Porter's interception return for a touchdown. It was special because Porter is a native of Louisiana and who better to shine than Porter. You see, what he did was carry the entire city of New Orleans into the end zone when he scored. What a great moment it was for the city, and literally everyone around the world.

With Hurricane Katrina's devastating torment of the city in 2005, the Saints playing in the Superbowl was a time of renewed hope for New Orleans, because, along with thousands of residents, even the Saints were displaced from the city for a while because the Superdome was damaged.

So, the victory is good for the city; for its economy and for its morale.

106.5 million people watch the game. I heard someone say Superbowl Sunday is the biggest 'non-holiday' holiday in America. I agree. It's huge.

"Everybody back in New Orleans gets a piece of this trophy," said Coach Payton.