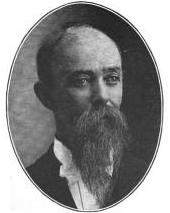 Edwin Young Chilton, M.D. was for many years the beloved physician of Howard Lake, Minnesota.  Howard Lake is known as the home of the good neighbor and Dr. Chilton was just that. For over three decades he labored throughout the countryside bringing healing and sympathy and brightness to hundreds of families, and sanctifying his memory to thousands of patients.

Born August 25, 1849 to Josua and Martha Freeman Chilton of Albany, Kentucky, Dr. Chilton received an academy education and then, while still a boy, began to read medicine with prominent physician, Dr. Elza Beckett, at Albany.  He graduated from Miami Medical College at Cincinnati and returned to Albany, where he practiced medicine from 1874 to 1880.  But, Dr. Chilton desired to seek his fortunes in a newer community, so in 1880 he moved to Howard Lake.  His success was assured from the start and he soon became one of the leading physicians in the county.  He kept well abreast of all the latest discoveries in the realms of medicine, philosophy and science, and in 1895, in order to further perfect himself, he took a post graduate course in the School of Surgery in New York City.  His thirty-four years in the village of Howard Lake were ones of great usefulness.  During thirty years of that time he was a leading member of the school board. In 1898, he was elected to the upper house of the Minnesota legislaturek, and did most efficient work as chairman of the committee on the State Hospital for the Insane. Possessed of a fraternal spirit, he was a popular member of the Masons, the Modern Woodman, the Knights of Pythias and the United Workmen.  He was likewise prominent in local affairs and served on numerous committees and delegations.  In 1875, Dr. Chilton married Laura Huddleston of Albany. Together, they had four children: Leo, Jessie, Alice and Freeman. After the passing of Laura, Dr. Chilton married Grace Tromly of Illinois.  They had two children: Walter and Madge. Dr. Chilton died May 25, 1914.  His death was sincerely mourned.

As an interesting side note: During the Civil War, Joshua Chilton, who was an industrious and peaceable citizen of Albany, was not permitted to remain at home because of his alignment with the Union. For this he was hated, threatened and even hunted, but nothing could deter him from his duty to his country. He was too old to join the Army, but two of his sons were not and served the Union well. Even though he literally became a refugee driven from his home, Joshua still rendered the Union cause good service. Eventually, Joshua Chilton was killed by General Bragg's soldiers during their visit to Kentucky.
at July 28, 2010