Founded mainly on fraud and poison, patent-medicine methods were the rage in America between the mid 19th and early 20th centuries. Before it was finally put to an end, gullible America was spending some seventy-five million dollars in the purchase of patent medicines to cure all sorts of ailments. You name it and there a patented medicinal cure for it, but, it was mostly all fraud. Not all, but most. So, the government set out to separate the sheep from the goats, but an honest attempt to do that developed a lamentable lack of qualified candidates for the sheepfold. Some remedies were honest in their claims and effective for their purposes. "None of these "cures" really did cure any serious affection, although a majority of their users recovered. But, a majority, and a very large majority, of the sick would have recovered anyway. Were it not so, were one illness out of fifty fatal, and this earth would soon be depopulated," said Samuel Hopkins in his 1931 book, Great American Frauds.

Newspapers bore a huge chunk of the blame for the popularity of the medicinal frauds. "The ignorant drug-taker, returning to health from some disease which he has overcome by the natural resistant powers of his body, dips his pen in gratitude and writes his testimonial. The man who dies in spite of the patent medicine, or perhaps because of it, doesn't bear witness to what it did for him," said Hopkins. "We see recorded only the favorable results: the unfavorable lie silent. How could it be otherwise when the only avenues of publicity are controlled by the advertisers?" he wrote.


I'm the happiest little woman In all this little town
And my merry laugh and singing
Takes the place of sigh and frown
For JOHN HAS QUIT HIS DRINKING
And is like himself once more
And the world is just a paradise
With such happiness in store
One particularly heartless swindle that was operated mostly through newspapers, which also meant the United States Post Office, for over 50 years, finally came to an end in August of 1935, when the Postmaster General declared that the Dr. J.W. Haines Company, The Golden Specific Company, of Cincinnati, Ohio was engaged in conducting a scheme for obtaining money through the mail by means of false and fraudulent pretenses. In this scheme, mothers, wives and sisters were led to believe that they could cure their loved ones of the drink habit by the secret administration of the Haines Golden Treatment. Some 18 years earlier, in 1917, The Journal of the American Medical Association had denounced Haines Golden Treatment as 'a cruel humbug,' claiming that no cases of drunkenness was cured by such means. As it turned out, the Golden Treatment was nothing more than a mixture of milk sugar and starch, capsicum and a minute amount of ipecac.

Sadly, the advertisements did not pray on the alcoholic, but rather the family members, and apparently it was effective. Check out the ad copy below. 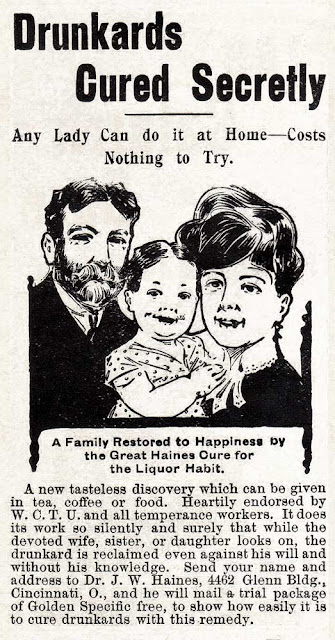 Even though Haines Golden Treatment was declared a fraud, most people remained convinced the product was the real deal.  When he died, Dr. Haines was eulogized as one of the people who invented a cure for drunkards.
at July 20, 2010