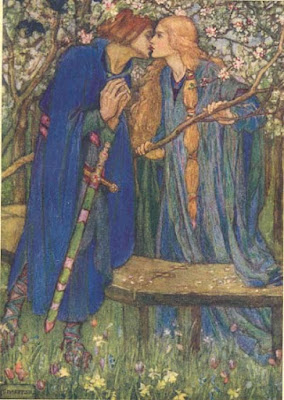 In folklore, Guinevere the legendary queen consort of King Arthur, was safe behind the walls of the castle. Then, Arthur's chief knight, Sir Lancelot, came along. Their affair eventually led to the downfall of Arthur's kingdom. After the affair was exposed, Guinevere was sentenced to burn at the stake, but Lancelot rescued her. She eventually fled to a convent when Arthur declared war against her lover. It was there, behind the walls of the convent, that Guinevere spent the rest of her life. Upon hearing the news of Arthur's death, and after discovering Guinevere had become a nun, Lancelot retired to a hermitage to live out the rest of his life in penitence, just like Guinevere.
The song, Guinevere, by The Eli Young Band says..."forgiveness ain't nothing but a lifeless tire on the shoulder of her soul that never rolls."
Life isn't always fair as we see it, or as we want it to be. We have our mountains and we have our valleys. You seem hard on the outside only because you have taught yourself to be that way because of past experiences. While you may think you need those walls, it is sad that you cannot see that perhaps there is a special someone who has come into your life, who is worth letting your guard down for.
For as much as she stumbled, she's runnin'
For as much as she runs, she's still here
Always hoping to find something quicker than heaven
To make the damage of her days disappear
Just like Guinevere
If there is one thing I have learned over the past few years, it is, just like Lancelot the once-brave knight, never let yourself be called out on strikes. ALWAYS go down swinging. Come what may, act as though it is impossible to fail. If you are going after Moby Dick, take along tarter sauce. And, NEVER give up on anyone or anything. Believe it or not, miracles happen.
at July 21, 2010