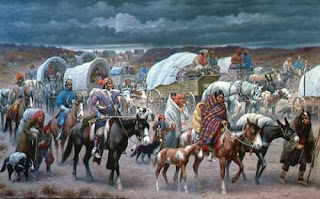 In 1794, after the destruction of the Cherokee towns of Nickajack and Running Water in the southern part of central Tennessee, a group of Chickamauga Cherokees moved west across the Mississippi River and into southeastern Missouri. In the winter of 1811-1812, the devastation of the great New Madrid Earthquake persuaded them to leave the area and move farther west into north central Arkansas between the White and Arkansas rivers.

The Western Cherokee received formal title to their land by virtue of a treaty between the United States and the Cherokee, where the Cherokee Nation ceded an area in the east Nation equal to that land occupied by the Western Cherokee in Arkansas. Under this same treaty the U.S. government began actively encouraging Native Americans to move west. It became known as the Trail of Tears. The Choctaw were the first in 1831. The Seminole were removed in 1832, the Creek in 1834, then the Chickasaw in 1837. By the early 1830's, more than 4,000 Native Americans were living west of the Mississippi.

Many Native Americans suffered from exposure, disease, and starvation while en route to their destinations, and many died. The Cherokee were the last to be removed. The U.S. Government tried to remove them in 1835, but most resisted, so they were forcibly removed. In the end, some 46,000 Native Americans had been removed from their homelands.

Between 1839 and 1846, the Indian Nation became divided over who owned the land. A third treaty, signed in August of 1846, determined that the lands occupied by the tribe belonged to all the members. At the same time, the Federal Government admitted that it had, among other things, improperly charged the Cherokee against the $5,000,000 they received for their lands back East. Three lawsuits were filed with the United States Court of Claims ruling in favor of the Cherokee. As a result, over one million dollars was awarded to the Eastern Cherokee.

The Department of Interior assigned a Mr. Guion Miller as special agent to identify those who were eligible to receive $133.18 that was given to each person. The Guion Miller Roll was made to distribute the money to all Eastern Cherokee that were alive on May 28, 1906, who could prove that they were members of the tribe at the time of the treaties of 1835, 1836 and 1845, or were descended from members of the tribe. Each applicant was asked for such information as full English and Indian name, residence, age, place of birth, name of husband or wife, names of children, place of birth and date of death of parents and grandparents, names and ages of brothers and sisters, and names of uncles and aunts. Mr. Miller released his report on May 28, 1909. Over 45,000 applications representing 90,000 individuals were filed with only 30,254 individuals being found eligible. 27,051 of those eligible lived west of the Mississippi River, with another 3,203 living east of the Mississippi River.

According to the records of the U.S. Court of Claims, over 250 of the applicants claimed to be a descendant of Fannie Cobb, a full-blooded Cherokee who lived in Fentress County, Tennessee.

Fannie Coker Cobb was my fifth great-grandmother on my mothers side. Her son, Jesse's granddaughter, Deborah, married George Boles, who was my grandfather's grandfather.

According to the book, Extract of the Rejected Applications of the Guion Miller Roll of the Eastern Cherokee, Vol. 3, (2006) by Jo Ann Curls Page, several of the descendants on my mother's side were among those applications which were denied. They included George and Deborah Boles and some of their children, including Barlow, Doll, Hige (my great-grandfather) and George's father, John Boles.

In his claim filed in 1907, Deborah's brother, Asa Smith, wrote that he was applying "for such share as may be due me of the fund appropriated in favor of the Eastern Cherokees through my grandfather Jesse Cobb. His mother was a Coker and she was a Cherokee Indian. She married a Cobb, my mother's maiden name: Fannie Cobb."  The claim was denied.