The Means Brothers at Horseshoe Bend 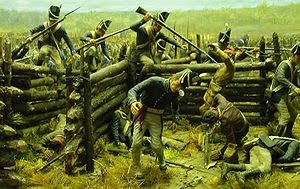 Prior to the War of 1812, Ahijah and Andrew Means, Jr. and a group of other men formed the Overton County Militia to protect their homes. The militia was commanded by Col. Stephen Copeland and was part of the 3rd Regiment, West Tennessee Militia Infantry in General Thomas Johnson’s Brigade.


As the white population increased, the Creek Indians began to divide among themselves into those who held more traditional views and those who were more assimilated through contact with whites. Tecumseh tried to unite the Native Americans in a confederacy against white Americans. Most Upper Creeks, called "Red Sticks" because of their bright red war clubs, wanted to resist white encroachment. Most Lower Creeks, more accustomed to whites, were inclined toward peace. This division led to the Creek War of 1813-14.

With the Creek already on the warpath, a war faction of the "Red Sticks" took part in a general uprising when a party of frontier settlers clashed with some native Americans at Burnt Corn, Alabama about 80 miles north of Pensacola, Florida. 250 people at Ft. Mims, just above Mobile, Alabama, were massacred and many others burned to death. When the news reached Nashville, General Andrew Jackson mobilized the Tennessee militia for a full-scale campaign.

In January 1814 Jackson launched his campaign to drive south into the heart of Red Stick country between the Coosa and Tallapoosa rivers. A deep bend in the Tallapoosa River, known as Horseshoe, enclosed one hundred acres, furrowed with gullies and covered by small timber and brush. Across the narrow neck of the peninsula the Creek had built a log breastwork. At the point was a fleet of canoes to insure an avenue of retreat. On the morning of Sunday, March 27, 1814, Jackson sent 700 mounted militia and 600 Cherokee and Lower Creek allies to cross the Tallapoosa and surround the bend. Jackson and the troops of the Thirty-Ninth U.S. Infantry and Tennessee Militia Infantry, about 2,000 men including brothers Ahijah and Andrew Means, marched into the peninsula of the Horseshoe to confront the 1,000 Red Sticks behind their barricade. Jackson warned, "Any officer or soldier who flies before the enemy without being compelled to do so by superior force...shall suffer death."

"Arrows, and spear, and balls were flying. Swords and tomahawks gleaming in the sun," said Sam Houston. Jackson’s hope was to breach the barricade. "For two hours "a brisk...galling fire" of cannon and musketry, a hail of iron shot and lead balls splintered the bark of the logs, but the "balls passed through the works without shaking the wall... Notwithstanding every shot penetrated...and carried with it death..still such was the strength of the wall that it never shook," Jackson later said.

It was Ahijah and Andrew Means and the rest of the volunteer militia's job to guard the supply wagons, pack horses and wounded. They were located behind the three main positions in front of the breastworks. Records show that some of the regiment were wounded, indicating their position was breached causing the militia men from Overton County to join in the fighting.

During a lull in the battle, a small cloud appeared. The Red Sticks, believing this was the sign they had been waiting for, fired upon the messenger of peace and resumed the battle with fury. The sign of deliverance brought only a quiet shower and the peninsula was strewed with the slain. The battle of Horseshoe Bend was over.

557 Indian dead were counted on the ground and the river held 200 more. All total, nearly 900 warriors are believed to have perished in this decisive battle. Jackson had lost 49 men and another 157 were wounded.

On August 9, 1814, Andrew Jackson forced the Creeks to sign the Treaty of Fort Jackson. Despite protest of the Creek chiefs who had fought alongside Jackson, the Creek Nation ceded 23 million acres, half of Alabama and part of southern Georgia, to the United States government. Even though the Creek War was largely a civil war between the Creeks, Andrew Jackson saw no difference between the Creeks that had fought with him and the Red Sticks that fought against him. Of the 23 million acres Jackson forced the Creeks to cede, 1.9 million acres was claimed by the Cherokee Nation who had allied with the United States. After becoming President, Jackson took the land ceded to his former allies, the Cherokees, together with other Cherokee lands in his removal of the Cherokees to the Oklahoma Territory. Chief Junaluska, the Cherokee Chief who saved the life of Jackson in battle and who led 500 Cherokees in support of Jackson at Horseshoe Bend, stated that "If I had known that Jackson would drive us from our homes, I would have killed him at Horseshoe."

The Pay Roll Records for Col. Copeland’s company showed that for the 4 months and 5 days of service, Ahijah and Andrew Means and others in the Overton County Militia received $8 a month with a $2.86 subsistence, for a total of $36.19. When the militia men returned to Overton County, both Ahijah and Andrew left their home on Obey River and moved to Missouri where they lived the rest of their days.