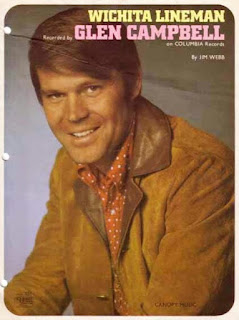 Lately, I have been compiling a list of my 1,000 all-time favorite songs. 1968's "Wichita Lineman," is one the first ones I wrote down. I played it countless times during my 38 years on the radio. The image of the record label is forever etched in my mind.

What always got to me, aside from the lyrics, was the opening bass line and the awesome solo that comes where the third verse should be. Jimmy Webb wrote the song specifically at the request of Glen Campbell, who was in the studio searching for a song about a town, something 'geographical,' he said. Not only did Webb not think it was a hit, in his mind it wasn't even finished. In late 1967, Jimmy had written “By The Time I Get To Phoenix” for Campbell. Now Glen and his producer were calling him every couple of hours and asking if the song he had asked for was finished. Finally Webb sent the song for them to preview with the notion that if they liked it, he would finish writing it.

Little did Webb know, Campbell recorded the song as it was, filling in what might have been a third verse with a guitar solo, one considered iconic and played on a Danelectro six-string bass belonging to legendary L.A. bass player and Wrecking Crew member, Carol Kaye, who is the one who came up with the famous five-note intro at the beginning of the song.

Jimmy Webb's inspiration for the lyric came while driving through rural southwestern Oklahoma. Heading westward on a straight road into the setting sun, Webb drove past a seemingly endless line of telephone poles, each looking exactly the same as the last. Then, in the distance, he noticed the silhouette of a solitary lineman atop a pole. He described it as "the picture of loneliness."

At "American Songwriter," Webb was quoted as saying, “What I was really trying to say was, you can see someone working in construction or working in a field, a migrant worker or a truck driver, and you may think you know what’s going on inside him, but you don’t. You can’t assume that just because someone’s in a menial job that they don’t have dreams … or extraordinary concepts going around in their head, like ‘I need you more than want you; and I want you for all time.’ You can’t assume that a man isn’t a poet. And that’s really what the song is about.”

With “Wichita Lineman," less is more. The record is just three minutes long:

Why did such an unlikely song become a standard? There are many reasons, but here’s one from American Songwriter's Allen Morrison: "The loneliness of that solitary prairie figure is not just present in the lyric, it’s built into the musical structure. Although the song is nominally in the key of F, after the tonic chord is stated in the intro it is never heard again in its pure form, with the root in the bass. The melody travels through a series of haunting changes that are considerably more sophisticated than the Top 40 radio norms of that era. The song never does get “home” again to the tonic chord - not in either verse, nor in the fade out. This gorgeous musical setting suggests subliminally what the lyric suggests poetically: the lonely journeyman, who remains suspended atop that telephone pole, against that desolate prairie landscape...yearning for home."

The song reached #3 on the U.S. pop chart and remained in the Top 100 for 15 weeks. It topped the American country music chart for two weeks and the adult contemporary chart for six weeks. It was certified gold by the RIAA in January 1969. In 2004, Rolling Stone magazine's list of the "500 Greatest Songs of All Time" ranked it at #192. British music journalist Stuart Maconie called it "the greatest pop song ever composed." 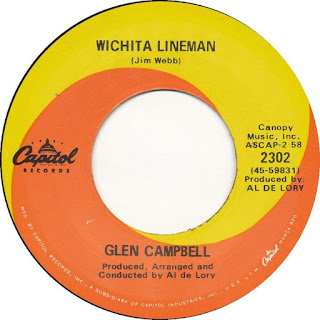