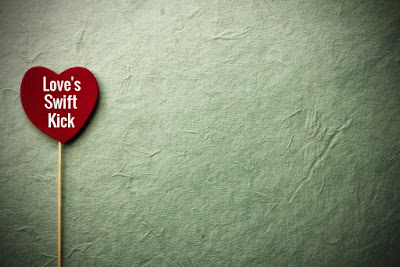 Teddy Roosevelt once said 'no man is worth his salt who is not ready at all times to risk his body, to risk his well-being, to risk his life, in a great cause.' This is a story of the time Elijah went the distance for love. I can't say it was his first love, but as you will come to realize, it will no doubt forever be one of his most memorable.

As president, Teddy Roosevelt's slogan was'speak softly and carry a big stick.' Perhaps Elijah should have carried a big stick during his first grade year at school. I remember well the day he came home from school and announced that he had a girlfriend. I also remember a few weeks later when he came home and said "I tried to break up her, but she kicked me in the shin, so I decided to stay with her." He pulled up his pant leg and showed me the bruise. I guess he thought 'it is better to be unhappy than have a bruised shin.' So, his first grade courtship with the girl, if you can call it that, continued. Twice more, it happened. He would try to break up with the girl, but always with the same result: a kick to the shin. I was ready to report the incident to the school or even call the girls parents, but he talked me out of it, saying he had a plan. So, being curious as to how he would handle it, I suggested he wear shin guards to school and just decided to let it be.

I think it was Mark Twain who said courage is resistance to fear, mastery of fear - not absence of fear.' It takes a mighty big man to overcome the things he is scared of...even a little girls swift kick to the shin. I didn't hear anything else from Elijah about his predicament until the very last day of school. It was on that day that Elijah walked the girl to her bus and then continued on to his bus, which was parked about 40 feet away. He waited until he was the last person to board and, just before he did, he turned to her screamed, "I'M BREAKING UP WITH YOU!" He hopped on his bus just as the door closed, and, turning to look, saw her standing there stomping the ground with the very same foot she had used to kick him. Elijah's plan had worked. He had broken up with the girl and had escaped without another bruised shin. I said, "What about when you go back to school next fall? She will beat you to a bloody pulp. He was convinced that over the summer she would forget him, which she did.

His successful breakup with the girl who had worn his shins out gave Elijah a new found courage like he had never had before. I think that summer was one of the best he ever had.

Oh, the joys of growing up, the experiences, the unforgettable moments, the memories we make and later come to cherish. I often wonder if looking for love is worth a bruised shin. It's hard to say, really. I guess it all depends on how desperate you are. Maybe a bruised shin is worth forgetting about love. Elijah would say yes, it is worth it.