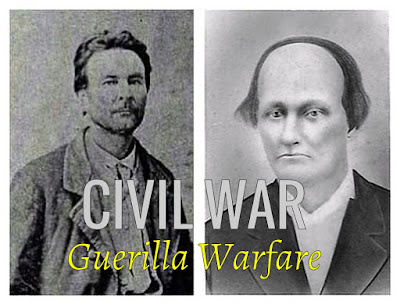 "Tinker Dave Beaty was born 200 years ago this Feb. 19th, in 1817. During the civil war, he formed a company, known as Independent Scouts, to protect the residents of Poplar and Buffalo coves in Fentress County, then Overton County, from Confederate Guerillas and troops, who were raiding the local population. This company, which sometimes consisted of as many as one hundred men, was officially recognized by the federal government and received into the service of the Union army on January 5, 1862.

The Independent Scouts' job was to act as scouts and combat Confederate guerrillas who came through their area. They were not paid, which by definition made them guerillas, but were supplied with arms and ammunition by the Federal authorities. Each man was required to furnish his own horse and equipment.

In 1863, a skirmish between the independent scouts and Confederates under Captain Hutchinson reportedly happened near George Boles' place in what is now Pickett County. Captain Hutchinson was killed and three of his men were wounded.

In 1864, the Independent scouts engaged Confederate Colonel John Hughes' company and Champ Ferguson in a skirmish as they came into Fentress on a foraging expedition. It reportedly happened in the Buffalo Cove Area near the home of John Boles. The independent scouts, being greatly outnumbered, were forced to retreat, causing them to fall behind some of their men. Thomas Culver, Jop Moody and Tinker Dave's young son, Thomas, were captured. Culver and Moody were killed and Thomas would also have been killed had it not been for two Boles women, who begged for his life. Several Confederates were wounded.

On February 1, 1863, Confederate guerillas rode up to David Smith's home on the East fork of Big Indian creek looking for his son, Asa, who was not at home. David and another son, Ahijah, were both killed. They are buried at Doogan Smith Cemetery, which is across from the house where they were killed. Asa Smith died in 1920. He is buried at Elias Bowden Cemetery in Fentress County.

It has been written that Tinker Dave Beaty was as ruthless and vicious in his defense of the Union as Champ Ferguson was of the Confederacy. Beaty and his Independent Scouts probably killed as many men as Ferguson and his men did, if not more, but because the Confederacy lost the war, Ferguson became the monstrous criminal and was hanged for his actions, while Beaty became ‘the celebrated Union scout.’ The same deeds that made a man a criminal could have made him a hero if his side won.

Tinker Dave Beaty died on Aug. 22, 1876. He and his father, George, are buried at Beaty-Lacy Cemetery on Tinker Dave's farm at Boatland.

I like to think that George Boles was acquainted with Elijah Koger, but there no account of that. Elijah lived at Oak Grove in Clinton County and George lived at Poplar Cove in Fentress County (Overton). After the war, they would be connected by marriage. While members of the Boles family were bust protecting the citizens of Fentress County (Overton County), Elijah Koger was busy doing the same as a member of the Clinton County home guard, a group of residents who had been trained in warfare at Camp Dick Robinson in Garrard County but were not officially brought into the service of the Union army. Koger went a step further with his commitment and it eventually cost him his life.

The guerilla warfare that took place along the Kentucky-Tennessee border, which Tinker Dave Beaty, Champ Ferguson and others were responsible for, was taking its toll on the citizens who lived in the Upper Cumberland area along the Tennessee-Kentucky border. Murder, theft and arson were commonplace.

In 1862, Union and Confederate factions of the Upper Cumberlands attempted to reach a peaceful compromise. A peace conference was held at Monroe in Overton County. The parties agreed not to raid into the adjoining counties. However, the compromise was dead before it began. Within hours, Ferguson and his men killed four Overton County men on the way back to Clinton County, and Confederate J. W. McHenry raided into Clinton County. They blamed it on a lack of communication by the peace officals, but many of those men who attended the conference were later murdered.

Elijah Koger was part of a group of home guardsmen who kept watch over Clinton County and he was one of the men who were chosen to repesent the Union at the Monroe Compromise.

On the morning of Sunday, June 1, 1862, Koger arose from his bed and headed out to the spring with his wife, Nancy, beside him. Shots rang out as a band of men appeared suddenly out of nowhere. Nancy screamed fo Elijah to run. As he tried to flee, Ferguson overtook him and shot him. Koger threw up his arms and said something, but Nancy could not make out his words because the couple's children were screaming. Shots continued to ring out as Elijah ran toward a fence some fifty yards from the home in the Oak Grove community. With Ferguson and nine other men following him, Elijah reached the fence and when he tried to cross it, Ferguson rode up close to him and shot him one more time. By the time Nancy reached the fence, the couple's 11-year-old daughter, Sarah, was holding her daddy in her arms. She was covered in blood. When Nancy reached Elijah, he gasped once, but never spoke. He had been shot more than 30 times. Nancy knelt beside her slain husband's body as Ferguson and his outlaw gang ransacked the Koger home.

The reason Elijah Koger was so involved in peace-keeping efforts during the civil war begins with his wife's brother, William Frogge, my 3rd great-uncle. He has the distinction of officially being the first person murdered by Champ Ferguson during the war. It happened on Nov. 1, 1861.

When he rode up to the Frogge cabin, Esther Frogge suspected no ill will. After all, she had known Ferguson since childhood. She offered him a seat and an apple. He refused both and sought out her husband, who lay ill in his bed. Champ asked William about his health. Frogge responded, “I am very sick. I had the measles and have had a relapse.”

Champ accused Frogge of having contracted the measles while visiting Camp Dick Robinson. Frogge vehemently denied that, but Ferguson drew his pistol anyway and shot Frogge twice, killing him. He then ransacked the cabin.

Ironically, the next to last person murdered by Champ Ferguson during the civil war was my 4th great-uncle, Martin Van Buren Duvall. Van was the uncle of Elijah Koger's wife, Nancy. It happened on April 26, 1865, seventeen days after Lee surrendered to Grant. Duvall was on furlough from the army and was at his brothers home, in sight of Oak Grove Cemetery, when he saw Champ Ferguson riding up to the residence. Van tried to run but Ferguson chased him down and shot him dead. He murdered his last victim, John H. Hurt, the next day."