Earl Pierce Was An Icon 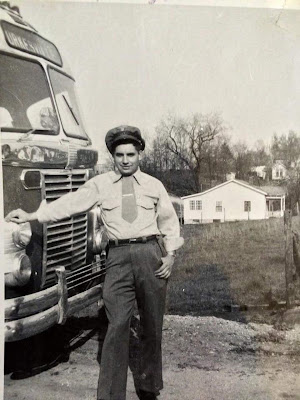 What is the measure of a man? Kindness? Love? Understanding? Cooperation? Commitment? Integrity? Is it what he has accomplished with the opportunities given? After all, its been said that a man is the captain of his own ship.

Actor Sidney Poitier wrote the measure of a man is in how he provided for his children. This story is about a man that many of us knew and admired. Through my early teenage years and into early adulthood, we all watched Earl Pierce provide for his wife and children; how he held down three jobs through most of those years. His mornings began with his school bus route. Us Speck kids (my niece, Johnna, included) only had one bus driver our entire school life, and that was Earl the Pearl, as we affectionately called him.

After his morning route, he drove a taxi up until it was time to take the school children back home. After a short break at home, he would leave his family and go to work overnight at Harvey Qualls' gas station, where Advance Auto is now located. This was his daily routine for several years, and this was the Earl Pierce that all of us knew.

He never forgot his school kids and I was glad of that because it helped me continue a friendship with Earl long I graduated from high school and long after he retired. The one thing I admired most about him, and what I will always remember about him, was his smile. Of course, there was that cigar he chewed on, and who can forget how we all would slam the door or make a noise when we went inside Harvey's, so he'd wake up and take our money for gas, or give us change for the soft drink machines outside.

Earl Pierce started driving a bus in 1949 when he went to work for Short Way Lines, Inc. For six years, 1949-1955, he drove the route from Albany to Burkesville, Glasgow, Cave City and Horse Cave. He operated his own taxi service, Pierce's Taxi, for several years in the 1960's. For forty years, 1968 to 2008, he worked for the Clinton County Board of Education as a school bus driver. He worked overnight at Harvey Quall's gas station from 1970 to 1985.

The dictionary describes a pearl as highly prized as a gem; a precious thing; the finest example of something. That was Earl the Pearl.

Earl Pierce died Thursday, Apil 20th. His funeral service will be Monday at 2pm at Talbott Funeral Home. Visitation will be Sunday from 5 to 9pm.

Some people are born to become a legend.