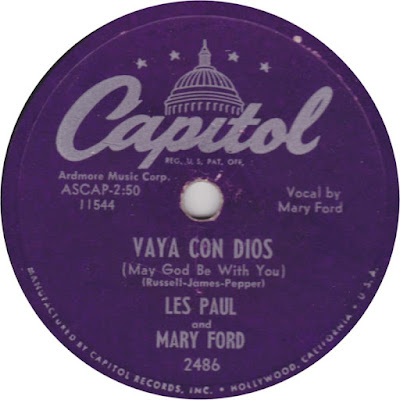 Les Paul, born Lester William Polsfuss on June 9, 1915, was one of the pioneers of the solid-body electric guitar, which made the sound of rock and roll possible. He is credited with many recording innovations. Although not the first to use the technique, his early experiments with overdubbing, delay effects and multitrack recording were among the first to attract widespread attention. The Rock and Roll Hall of Fame refers to him as an "architect." He recorded with his wife, Mary Ford, in the 1950's and they sold millions of records. One of their more popular recordings was "Vaya Con Dios (May God Be With You)," which I have in my collection of 78 r.p.m. records.

"Vaya Con Dios (May God Be With You)" was released on Capitol Records (11544) in June of 1953. Side B is "Johnny (Is The Boy For Me). The record stayed on the Billboard magazine chart for 31 weeks, peaking at #1 on August 8, 1953, where it stayed #1 for 11 weeks. The record sold more than 2 million copies. Members of the Western Writers of America proclaimed it one of the Top 100 Western songs of all time. The recording was inducted in the Grammy Hall of Fame in 2005. 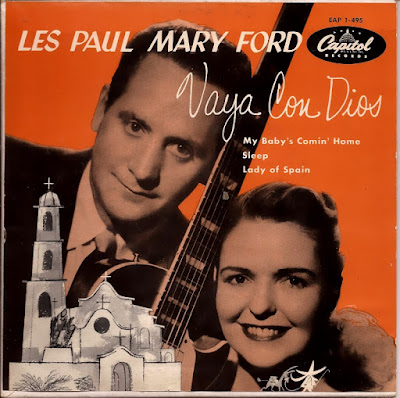