A Part Of Ronnie Comes Home

Funny how life somehow keeps moving forward even when things happen that make us want time to stand still. I spent many months, even years wanting to hang onto every detail of my brother, Ronnie, after his death in 1981, and wondering what he would have become had he lived. The only gifts left to my heart and mind were the memories I've managed to hold on to, that is until just the other day when a notebook of song lyrics and chords that my brother lost the night our band, CW Steele, played at the 1978 Clinton County Fair was given to me. My longtime friend, Tim, was working in a youth job program that summer and found the notebook while cleaning up the fairgrounds the next morning. He intended to give it to my brother, but as time went on, as you would expect, life got busy and he just simply forgot about it. As fate would have it, he ran across it recently and gave it to me. He apologized for taking so long to return it, but who knows, if he had given it to Ronnie right then or soon after, he might have lost it again or even thrown it away. Getting it back all these years later means everything because my brother died in a car accident on May 7, 1981. Now, we have his handwriting, something we haven't seen since before he died 39 years ago." 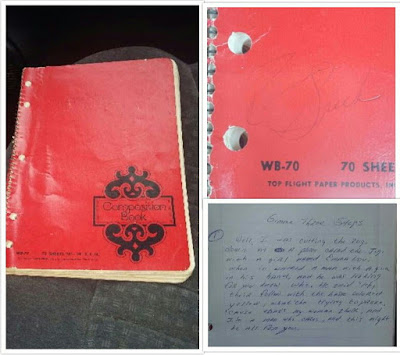