Sheriff John Boles was a Radical

"State of Affairs in Overton County"

If you should find room and consider the following worth publishing, the writer hereof will be greatly obliged. The writer hereof desires to give to the public some facts transpiring in the notoriously represented county of Overton, that she has been frequently and generously represented for the last six months as being a den of returned Rebel guerrillas, and that only a small number of her citizens were loyal and worthy of any of the rights and immunities of citizens, I have no doubt but by whom these representations have been made.

Have, as a general thing, those who have served in the Federal army and returned home and living quietly within her limits, made these representations? Did Col. Garrett, the late representative from this county, so represent affairs? Did gentlemen who have been engaged in the oil business in this county represent that the county is infested with returned Rebel desperados? I would just say in answer to these questions, "not so far and heard from."

The question, then, very naturally comes up, who are making these representations? I would answer that they are men who, but few of them have ever been in the Federal army, and in all composing a small number known in this county as radicals, but as it happens holds some of the offices in the county, who obtained these offices, not from the choice of citizens but by appointment, and men who believe in furnishing our sheriff (Boles) with a guard of from five to fifteen men and paying them (cost of subsistence and all) $52.50 per month each out of the county treasury; and this too when our revenue collector last year, a discharged Federal soldier, rode through the county without a single man with him, and collected the taxes with better success than usual, and was never molested by these believed to be Rebel guerillas.

This same sheriff also refused to hold the election last March, as by law he should have done, and openly declared that he would arrest and carry to Nashville any magistrate or other person who should presume to open and hold the elections. But however, the election was open and held in all of the districts but one, by law, so far as I was informed, and he has not arrested any person yet; but he went right off to Nashville swearing he would break the elections all up, and accordingly, on last Monday, the first Monday of April, those who were elected made application to be installed into office by the County Court, when Sheriff Boles (Deputy Governor, as he styles himself) rose and produced and read to the Court, a paper writing, purportedly to be an order from Governor Brownlow, by Secretary Fletcher, to the honorable John Boles, sheriff, directing or commanding him to allow no Rebel officers to be sworn into office, or something to that amount, and concluded with a harangue to the court that if one of them voted to install a man who had been elected into office, he would most certainly arrest him and carry him to Nashville, whereupon the court unanimously (except two Magistrates who were, I suppose, afraid to vote against it, and did not vote at all) declared the March elections null and void, and authorized or empowered Sheriff Boles to appoint constables throughout the district; and this, too, when there were men demanding to be installed into office who were Union men.

The court then, upon motion, declared the certificates which had been given to authorized voters by the County Clerk, whom the governor through Sheriff Boles, had appointed some 12 months ago, all null and void; and that voters must get new ones before they could vote again. This same party, sometime since, there being a vacancy in the Legislature, occasioned by the resignation of A.E. Garrett as representative, in convention in the town of Livingston, nominated Sheriff Boles as the radical candidate for that position. John Q. A. Sproul, G.A. Overstreet and Dr. Meadows were also candidates. I suppose of their own will.

The election went off, and the result is that Sheriff Boles is badly beaten, and Mr. Overstreet, a straight out Union man, is elected, while Mr. Sproul, also a Union man, and Dr. Meadows, an ex-rebel, are also beaten far behind - Dr. Meadows being behind all. Now, it looks like this notorious Rebel gang in Overton are not so quite hostile to the government and Union men when they come up to the ballot box; those who are permitted to vote and elect a Union man and reject a Rebel, but yet they are not quite loyal enough to elect a radical. So, Sheriff Boles still presides as Sheriff, etc.

Now in conclusion, I desire to say that I have served in the Federal army; have been residing in this county for the past six months, yet I have not for once seen or heard of a rebel-returned soldier molesting any Union man. I have been through the county some and find the people all friendly and hospitable and engaged in useful pursuits of life. I have, more than once, seen on public days men, professing to be very loyal, some of them, I believe, composing the Sheriff's guard, armed and intoxicated, drive every man who had ever been considered a Rebel out of town, beating them up scandalously, and yet they did not resist this kind of abuse. I have not heard of an instance in which a man who had been a Rebel, attempted to resist the civil law.

As regards to the certificate matter, I have only to say that I suppose the county court clerk complied with the law to the best of his knowledge and ability, and if elections are to be set aside and broken up, and declared illegal, by anyone, I think that some legal cause should be shown for so doing and legal proceedings had; and further, if elections are not to be regarded, at once say there shall be none, and do away with the trouble of holding them, and say to the people that, though they have elected a Union man to the legislature and rejected an ex-rebel: "You are not radical yet enough to be allowed to vote."

But I am ever confident that the present state of affairs will not last long; that those who persist in the idea of further persecuting those lately in rebellion, will discover their error and desist, and that peace and good will yet reign.

Signed by: A Citizen

During the Civil War, John Boles served as Captain in his brother-in-law Tinker Dave Beaty's Independent Scouts. His sons Robert and George (my 3rd great-grandfather) were also members of that guerilla unit. Before the war, John was a politician, serving as state representative for Overton County from 1851 to 1853, and as state senator of Fentress, Morgan, Overton and Scott Counties from 1853 to 1857. He was the first post-Civil War Sherriff of Overton County, from 1865-1867. John was born in Blount County, TN on June 16, 1802 - the son of James Boles and Elizabeth, Jennie Franklin. Elizabeth, aka Be'toc'e," was a full-blooded Cherokee Indian, the granddaughter of Tah Chee "Dutch" - "the Long Warrior" - of The Telico Bird Clan, and  Aisley of The Paint Clan.

John's wife, Matilda, was the sister of Union guerilla Tinker Dave Beaty. John died on March 18, 1869, at the age of 66. He and his wife are buried at Bolestown Cemetery near East Port Marina. The American flag flies nearby. 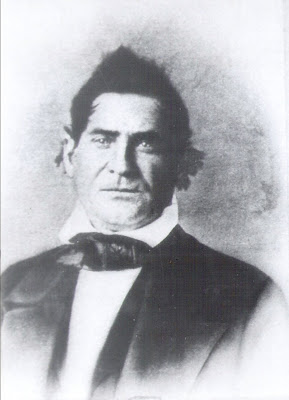