My 4th great-grandmother on my mom's side, Elizabeth Franklin Boles, also known as "Be'toc'e," was the daughter of a full-blooded Cherokee Indian. Her grandfather, Da-Tsi (Tah Chee) "the Long Warrior of The Telico Bird Clan," was a child when his parents joined the first Cherokee party to move west of the Mississippi River, from an indian village on the Coosa River, in what is now Alabama, to the St. Francis River in Arkansas.

Throughout his life, Tah Chee, also known as William Dutch, was known as a fearless warrior, becoming a major political force in the old settler party, fighting many fights with the Osage Indians who lived near the Cherokees. The treaty the Cherokee made with the United States in 1828 so infuriated Tah Chee that he led several families to the Red River country. To keep the frontier peaceful, the Army ordered both nations to stop their raids, an order Tah Chee refused to recognize. Tah Chee fought a one-man war with the U.S. Army for years, but eventually became a scout for them, where he reached the rank of Captain.

Tah Chee (Captain William Dutch) and his wife, Aisley of The Paint Clan, were my sixth great-grandparents. Their daughter, Rose of the Tellico Bird Clan, was the mother of Elizabeth Franklin Boles. 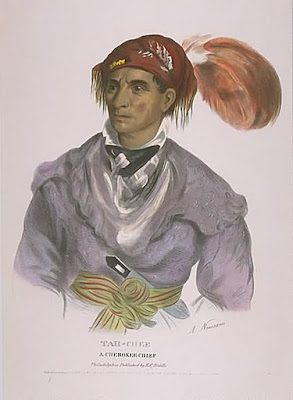