The Officer family lived in a rural community in Overton County called Sinking Cane. William Alexander Officer, who had married a Cynthia Holford in that community in 1836, operated a sizable farm with pastures, timberland and a large two-story house. Today, the location is about two miles off Highway 84 on Rock Springs Road, near the foot of Monterey Mountain. The couple produced seven children — four girls and three boys — and dealt primarily in livestock. He favored the Confederacy.

William spent a lot of time driving livestock further into the South. Everyone knew he was away from home a lot and also was successful and financially sound. Therefore, given the ongoing war, the Officer family was subject to harassment by federals who came to the Officer home place and took what they wanted — a common practice on both sides of the conflict.

One of the Officer sons, John, had been born in 1845 and was thus a young man when the Civil War broke out. He enlisted as a private in the Confederate Army. In March 1864, during a period in which Tennessee was seeing a flurry of wartime skirmishes and guerrilla activity in rural areas, John had been granted a leave from Company F, 13th (Dibrell’s) Tennessee Cavalry Regiment to go visit his family. With him had come a handful of fellow Confederate soldiers who had become separated from their command.

He was home with his companions on March 12, 1864. His mother rose early, and with daughter Frances, set to work to make an especially good Saturday breakfast for John and their visitors. The young men were happily eating what was probably the best meal they’d had in weeks when a big band of federal soldiers, some 200 of them, part of Col. William B. Stokes’ command, rode up to the house.

The federals had been sent out by Stokes to hunt down Confederate guerrillas, particularly Champ Ferguson. Upon their arrival, John Officer jumped up in a panic and fled into another room, where a slave of the family, named Abraham, but usually called Uncle Abe, helped him up into a loft or attic area to hide.

The guns of the family’s visitors were not far away, stacked on one another in a hallway, but the federal band was a big one and there appeared to be nothing to gain by dashing to get the weapons to make a hopeless stand. Union troops entered the house and things went bad fast. Shooting began, killing on the spot five of the young Confederates: John P. York, Oliver Shipp, Samuel Garrett, William Slaughter and William Lipscomb.

Slaughter served in Company C, 1st Regiment Texas Rangers. York, Shipp and Garrett were part of the 8th Texas Calvary and Lipscomb was in the 3rd Regiment, Alabama Cavalry. A sixth Confederate there was 2nd Lt. Robert S. Davis, also of the 8th Texas. Davis was wounded but did not die inside the house, as his companions had. The federals hustled the wounded man outside and put him against a gatepost, tying him in place. There he was executed by a hastily formed firing squad (That gatepost is on display in the Overton County Museum).

In 1922, Uncle Abe gave an eyewitness account of the incident before the Tennessee Historical Commission. According to his testimony, Davis spoke to his killers before they shot him, saying, “You ought not do this. I have never done anything but my sworn duty.” Abe also noted that Davis never flinched when the federal soldiers fired and took his life.

The six massacred soldiers are buried at Officer Cemetery, located near the home. This event is referred to locally as the Stokes Atrocity. A state historical marker, describing the event, is posted on the main street in Monterey. 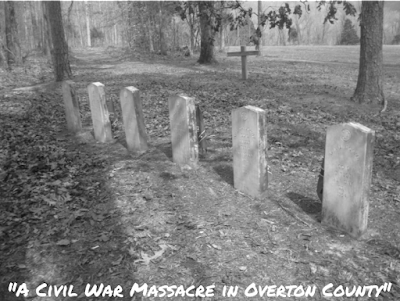