The Things a Father Will Do

From the age of 14, I played a lot of gigs, traveled a lot of miles and spent a lot of time hanging out with Belknap Byers, Jr. Of all the music photos of him, my favorite one doesn't involve me, but rather his son, Andrew, who, followed in his dads footsteps and became a drummer himself. Andrew and his band were playing a gig in Cookeville. During the performance, Andrew's bass drum wouldn't stop sliding and there was no time to stop and make an adjustment. So, as Andrew explained, JR did what any good dad would have done, he crawled under Andrew and held on to that drum. "As soon as we kicked off the first song, my bass drum flew away from my foot. I barely could even grab it. The next thing I knew my dad slid in underneath me, grabbed that drum, and held it the entire set. He later told me that I have the right foot of John Bonham. I said 'no I have the right foot of Jr Byers.'" Thankfully, someone standing on the side of the stage took a picture of it.
💕💕💕 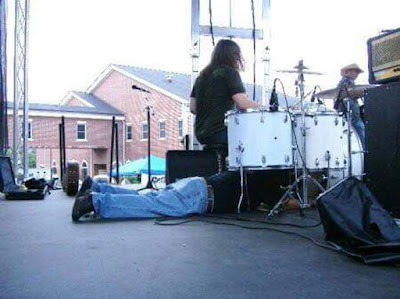