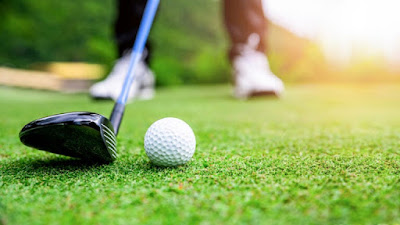 Sunday, Aug. 2, 1970 was the biggest day ever at Seventy Six Falls Country Club in Albany, KY, wrote the Clinton County News on Aug. 6th that year. It was on that day that a champion was crowned in the country club's first ever club golf tournament.

So who was the first champion? It was Larry Conner, who posted a score of 161 in the 36-hole event. Ozro Pitman placed second with a score of 163, only two under the winner. Third place went to Gayron Wallen, who had tied with N. L. Morgan, Jr., with 165 each. The winner was decided by flipping a coin. Others in the first flight were Jackie Latham 172, Sidney Scott 171 and Gene Latham 176.

A large crowd and 36 golfers braved the 100 plus degree tempera­ture that Sunday. A.B. Gibson, Clinton County News editor, and one of the participants in the tournament, wrote in his "B.A. Nosbig" column that he heard one man say it was so hot that if the course hadn't been so pretty and the water, furnished by Richard Fryman and Eagle Pass Cheese Co., hadn't been so cold he would have thought he was playing in hell. The newspaper reported that the extremely high temperature was the only complaint heard.

At the conclusion of the tournament, directed by club manager, Harvey Aaron, another Clinton County golfer, Conner was presented a set of golf woods and a championship trophy. Pittman received a golf cart and Wallen and Morgan divided the third place prize of a dozen balls.

Fourth flight was a squeaker with Kelly Keisling becoming the winner after a two hole sudden death, which still ended in a tie with Horace Brown at 196 each. When it became too dark to play, the winner was de­cided by a flip of a coin. Ezra Neal was third with 197. Each received golf balls as prizes. Others were Tony Conner 210 and Hank Chilton 216.