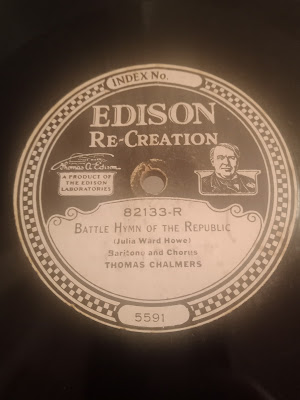 My 105-year-old recording of "Battle Hymn of the Republic," by singer Thomas Chalmers, was recorded May 29, 1917 at Thomas Edison's recording studio in Manhattan. The recording is registered with the Library of Congress.

"Battle Hymn of the Republic" first gained popularity around Charleston, South Carolina. It became known as "John Brown's Body," following the insurrection at Harper's Ferry, led by Abolitionist John Brown, whose actions, trial and subsequent execution made him a martyr.


"John Brown's body
lies a-mouldering in the grave
His soul is marching on"
By the time of the Civil War, the song had become a popular marching song with Union Army regiments. It was when Julia Ward Howe visited Washington, DC on November 18, 1861 that "Battle Hymn of the Republic" was first born. Howe and her husband were active abolitionists, who had experienced first-hand a skirmish between Confederate and Union troops in nearby Virginia, and heard the troops go into battle singing "John Brown's Body." That evening in the nation's capital, Howe was inspired to write a poem that better fit the music. It began "Mine eyes have seen the glory of the coming of the Lord." 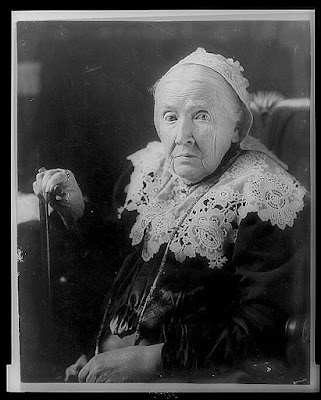 This photo of Julia Ward Howe was taken in 1908.