On April 16, 1953 the New Era reported that 29 men had gone to Louisville for Armed Forces physical examinations. Among them was Robinson Elvin Angel. He was one month shy of celebrating his 20th birthday when Uncle Sam called. He and seven others left for Louisville and induction into the U.S. Army on July 7th. The others were James Cook, Haden Dicken, Arthur Stockton, Freddie Boils, Buford Bowlin, John Nuszbaum and Lowell Davis. It was during the Korean War and Elvin was in the army for two years. For 18 months he was stationed in Alaska.

Hershell Key tells a story about Elvin's sergeant ordering him to clean a rifle. It wasn't his rifle, so Ervin said no. The sergeant repeated his command, "I said to clean that rifle!" Elvin replied, "I ain't gonna do it!" So, Hershell said, Elvin was sent to Alaska.That may or not be the exact reason, but it's funny to hear Hershell tell it that way.

When he returned home, Elvin joined the class of 1957 during their sophomore year. In the local newspaper column, Senior Class News, someone wrote "Elvin has been an asset to the class and we are proud to have this veteran among the members of our class." Elvin was 24 years old when he graduated from CCHS.

Elvin's nickname was Bookout. A couple of his friends I spoke with did not know how he got that name. One of his close friends, Harvey Aaron, said he once asked Elvin how he got it, but he couldn't remember.

By all accounts, Bookout was a great baseball and softball player. I read where, in 1957, he was a member of a softball team sponsored by Conner Motel, along with the likes of John B. Smith, Page Cook and James Brown. Another teammate and classmate, Gene Latham, said Bookout was a great pitcher. He played softball for several years.

Robinson Elvin Angel was born on May 28, 1933, the son of the William Albert & Lula Mae Daniels Angel. His wife, Brenda Gibbons Angel, preceded him in death. Bookout was known by many. We will miss seeing him walking around town. He always walked.

Thanks to Harvey Aaron for the photo. 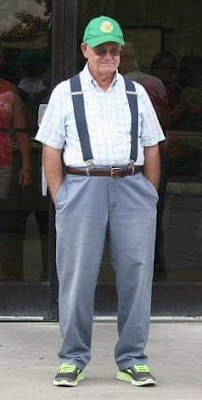