To Everything there is a Season

I was thinking about this photo that appeared in my Facebook history this morning. The year was 2011. It was Halloween. Jerry Perdue and I were at Stony Point's fall festival, and there they were, Ralph Clark and Buddy Bell, two legends on stage with Cartwright Express. We couldn't wait to ask for a photograph. The plan was for us to take each others' photo, only after I took this photo I got distracted somehow and missed my opportunity to have my photo taken with them.

For a long time, I was a little bit jealous that Jerry had gotten his photo made with these icons and not I, because we never had another opportunity to be together, the three of us, as Buddy died on Jan. 17, 2012 and Ralph died on Aug. 30, 2014, and then Jerry died on Thanksgiving Day in 2017.

Time and tide wait for no man. As I get older I realize more and more that some things are just inevitable - birth, death, the sun rising in the morning, and the passage of time. There is no way to control those things.

I miss those guys. Funny how this photo, the one I was once jealous of, now means the world to me. 💕 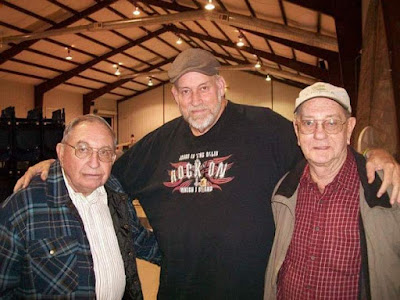