John Fogerty is Finally Reunited with his Songs After 50 Years

It's official, according to Billboard Magazine, John Fogerty has gained worldwide control of his Creedence Clearwater Revival publishing rights after a half-century struggle. He just posted the following on his Facebook page. "As of this January, I own my own songs again. This is something I thought would never be a possibility. After 50 years, I am finally reunited with my songs."

To think about the CCR catalogue is to relive my pre-teen years. The band's most prolific and successful period began in 1969 when I was about to turn 10. For two years, CCR had a dozen consecutive top 10 singles and five consecutive top 10 albums. The band broke up in 1972, but by then we already had all of those great songs: "Bad Moon Rising," "Lodi," "Proud Mary," "Green River," "Down on the Corner," "Have You Ever Seen The Rain," "Heard it Through the Grapevine," "Run Through the Jungle," "Up Around the Bend," "Travelin' Man," "Long as I Can See the Light" and "Lookin' Out My Back Door." "Suzie Q" had already been a bit in 1968.

My favorite CCR songs were "Bad Moon Rising," "Lodi" and "Proud Mary." I have a recording of my brother, Ronnie, age eight, and myself, age eleven, jamming to "Proud Mary." He is singing and playing drums and I am playing piano and singing the repeat line on the word, "Rollin'."

Fogerty had relinquished his artist royalties to Saul Zaentz at Fantasy Records in 1980 to get out of his Fantasy deal. “I tried really hard,” he says to get them back in the decades since he signed his label and publishing deal in 1968 with Fantasy but suffered setback after setback at the hands of Zaentz, who died in 2014.

For years, Fogerty refused to play CCR songs live, unable to stomach Zaentz making money off his performances, but he softened his stance in 1987 with a little prodding from Bob Dylan during a concert in Hollywood that included Dylan, Fogerty and George Harrison. “The crowd started asking for ‘Proud Mary. Bob said, ‘John, if you don’t do ‘Proud Mary,’ everybody’s gonna think it’s a Tina Turner song,’” referencing Ike & Tina Turner’s 1971 cover. Fogerty sang the song and later that year, began incorporating CCR songs back into his set list.

When Concord bought Fantasy Records in 2004, one of the first moves the company made was to reinstate and increase Fogerty’s artist royalties, which he hadn't received in 25 years. Under the new agreement, Concord retains the CCR master recordings already in its catalog and will continue to administer Fogerty’s share of the publishing catalog for an unspecified limited time.

Fact #1: CCR’s Chronicle: The 20 Greatest Hits, released in 1976, has spent 622 non-consecutive weeks on the Billboard 200, the fifth highest of any album on the chart. 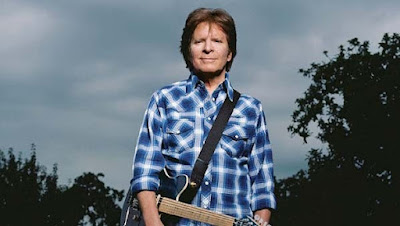