I Give You Me 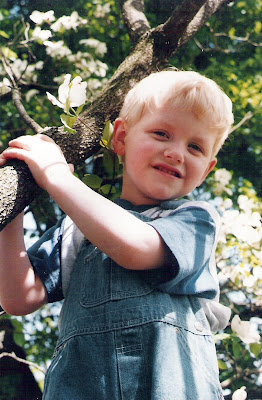 My aunt, Marsha, sent me a great e-mail the other day of a small boy, who did not have any money to put into the offering plate, so instead, he put the plate down on the floor, stood inside it and proclaimed, "Jesus, I don't have anything to give you today, but just me. I give you me!"

That story reminded me of a incident that happened almost 10 years ago at Beech Bottom Baptist Church. It never failed that when we would walk into that Church, people would start grabbing for all three of my kids. Always, at some point during the service, J.D., or Marina, would walk from one pew to another, usually enticed by a piece of candy or a stick of gum or some toy. Not that I agreed with all that, but I was very outnumbered. I was raised to keep my back to the pew and my face turned toward the preacher, and if I didn't, boy did I get in trouble! Elijah was an infant so he was unable to walk around. Praise the Lord for that much!

One Sunday morning, as we walked into the Church building, someone reached for J.D. and just like that he was gone. Just before the Preacher began his sermon, I looked around from my seat up front and spotted J.D. sitting in someone's lap with a sucker in his mouth. I thought that would keep him quiet -- and still! Boy was I wrong. Right in the middle of the sermon, I caught movement out of the corner of my eye and looked around just in time to see J.D. walking right up the middle of the aisle with one of his arms outstretched ------------- headed right for the preacher. I reached my arm out as far as it would go, but he was too far away for me to grab while sitting down. Just as I started to stand up and get him, the preacher said, "He's okay, let him alone." I thought better than to do that, but I sat down anyway. And, J.D. continued heading toward the puplit with his arm outstretched. I was on the verge of crawling under the pew when all of a sudden, J.D. went PAST the preacher. I thought, "Huh?" It was then that I realized he was headed for the offering plates! At Beech Bottom, the ushers would take up the offering, and immediately return the plates to the table behind the pulpit with the money still in the plate. To myself I said, "Oh no, he's going to get some money out of the offering plate!" How embarrassing this was going to be. How mad I must have been. I'm sure my face was beet red. Just as I once again started to crawl under the pew, J.D. reached the offering plates. I thought, "Here goes!" But, instead of reaching for the money in the plates, he simply droped the sucker's wrapper in the offering plate, turned around with no emotion showing, and headed right back to the lap he had been sitting on.

Everyone laughed, mostly at me, but I was relieved that at least he hadn't taken any money out of the plate. At the time, I tried to think of a way that I could apply reason to what J.D. did. I began asking myself, "How can the Lord use that candy wrapper?" I came up with this: In J.D.'s heart, he was giving. To him it wasn't about m-o-n-e-y. He was giving what he had. And, even though it was a candy wrapper, it reminded me that God wants me. J.D. only knew to give, and he was giving from his heart. I Give You Me...if only I could learn to do more of that.