WANY-AM went on the air for the first time 50 years ago this Saturday, October, 25th. This is the story of how it all began.

The year was 1947. Nine-year-old Darrell Speck told his mother, Dimple, that he wanted to learn how to play the guitar just like her. So, she began teaching him the chords. Soon, he was singing and playing anywhere and everywhere he could. Darrell had a best friend. His name was Sid Scott. Like most young boys, they could be a little rambunctious at times. School teacher Martha Brummett said it was more than a little. Of the hundreds of students that sat in her classroom, she said Darrell and Sid were the meanest. Once, they were kicked off the team bus on the way to a baseball game at Tompkinsville. Apparently, they had become so unruly that the coach had the driver pull over, and Darrell and Sid were left standing on the side of the road. Luckily, someone they knew came along and gave them a ride to the game. They managed to beat the bus to Tompkinsville, which infuriated the coach even more. He refused to let them play. But, soon the Bulldogs were down and in desperate need of a rally. The coach had no choice but to summon Sid from the stands. He came straight out of the stands and walked directly to home plate, where he promptly hit a homerun. Darrell and Sid did everything together and entertaining, one way or another, was the number one thing for them to do. They LOVED to entertain. Darrell would take his guitar to school, and he and Sid would sing and play in front of the students and faculty every chance they got. 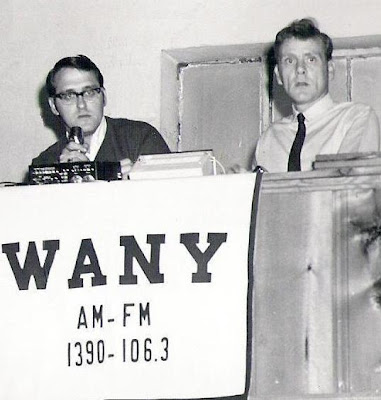 (Sid Scott, left, and Darrell Speck during a live broadcast at CCHS.)

By the age of 16, Darrell had gotten a job performing on WAIN-AM in Columbia. He and his band, Darrell Speck and the Rebel Rousers, would drive to Columbia every Saturday morning to do a 15 minute radio show. A record would later be made that would eventually put Darrell into the Rockabilly Hall of Fame.

In 1955, Darrell left WAIN and began a show on a new radio station that had signed on the air in Monticello. The first time he went to WFLW, Darrell met the station's general manager. His name was Welby Hoover. Darrell auditioned for Welby right on the spot. Welby liked what he heard and agreed to let Speck have a weekly show on WFLW. 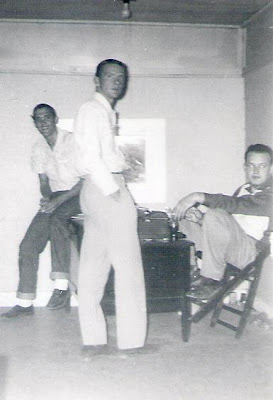 (The photo to the right shows Sid Scott, left, Darrell Speck and Welby Hoover at WFLW in 1956.)

Darrell did not attend high school past 1955. In 1956, he joined the Navy and married his high school sweetheart, Glenda. He would later get his GED. Sid graduated from Clinton County High School in 1956.

Just as Darrell was leaving WFLW to go to the Navy, Sid was being hired there as a disc jockey. He went to work for Hoover in June of 1956. His show was called "The Albany Hour." It aired from 1:00 to 2:30 p.m. Monday through Friday and originated from Dr. William C. Mann's chiropractic office in Albany, which is the building next door to Burger King today. Sid was popular, and good, at everything he did. He graduated from CCHS as one of the all-time great basketball players. Along with being a popular disc jockey, Sid also sold tickets and was in charge of security at Clinton Theatre. But, it was through his radio job that Sid learned that the Federal Communications Commission had made an AM frequency available for Albany. He told theatre owners Cecil Speck and Wallace Allred and plans for a radio station in Albany began to be made.

The application authorizing construction of a new standard broadcast station in Albany was granted on May 7, 1958. The following month, Sid left WFLW. Darrell had returned from the Navy, and soon Hoover would leave WFLW to become WANY's first general manager. WANY-AM officially went on the air on Saturday, October 25, 1958. 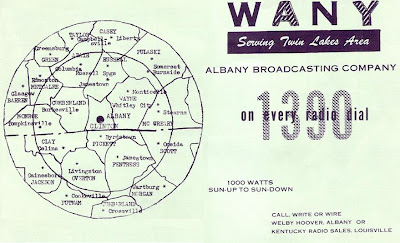