I Heard The Bells

It was Christmas 1864. Everywhere there was blood shed. It was brother against brother. The American Civil War was at its climax. The thought of peace weighed heavily upon the mind of Henry Wadsworth Longfellow, for in every single stanza he wrote, "Peace on earth, good will to men!"

"Peace on earth, good will to men."

Peace on earth, good will to men?

During the Civil War?

Those words - peace on earth and good will to men are definitely out of place.

Who could imagine Henry Wadsworth Longfellow as a hymn writer! Who would have thought it? With the mere mention of his name come thoughts of "the village smithy," "the chestnut tree," "three doors left unguarded," and the stair clock tirelesly ticking away, "Forever - never! Never - forever!" But at Chrimast time during the year 1864, Henry Wadsworth Longfellow took out his pen and wrote...

The next two verses echo strongly what Longfellow must have been feeling...

Then pealed the bells more loud and deep
God is not dead, nor doth He sleep
The wrong shall fail, the right prevail
With peace on earth, good will to men

But it is the final two verses that tells the tale. The verses are normally left out of hymnals.

Then from each black, accursed mouth
The cannon thundered in the South
And with the sound the carols drowned
Of peace on earth, good will to men

It was as if an earthquake rent
The hearth-stones of a continent
And made forlorn, the households born
Of peace on earth, good will to men

In 1861, Longfellow had an ideal home; a lovely wife and 5 children. When the Civil War started a sorrowful tragedy occured. Longfellow's wife had been cutting their youngest daughter's hair and wanted to save a lock of her curls. She was heating some sealing wax and a breeze blew some hot wax onto her dress, igniting it in flames. She ran to her husband's study where he tried to put out the flames with a rug, but it was too small, so he embraced her with his own arms and put the fire out. His hands, arms and face became severely burned. His wife had been so badly burned that she died the next morning and he was in the hospital for the burns he had suffered. For three years he wrote in his journal that he no longer had peace or happiness in his life. To make matters worse, his son, Charles, was wounded in battle with the bullet hitting his spine. In 1864, just as the war seemed to be coming to an end, Charles became healed of his wounds. Longfellow's faith was restored. That was the basis for I Heard The Bells On Christmas Day, written during Christmas of 1864. 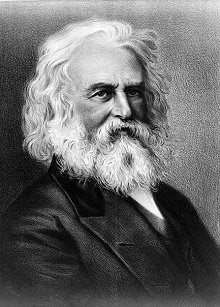