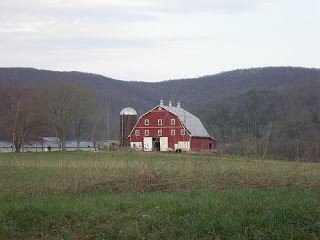 It is the perfect setting for a community, is what Thomas Stockton must have thought when he was the first to arrive in this part of Kentucky in 1798. The man who had built one of the first grist mills in the Smokey Mountain area of Tennessee had crossed over Cumberland Mountain and as he stood on a spur of that elevated platform, later to be called Poplar Mountain, he looked down at the area below him....an area he named Stockton's Valley. According to "A History of Kentucky," written in 1847 by Lewis Collins, on the subject of Poplar Mountain, he wrote, "On a clear morning, the fog seems to rise of the water courses in the distance, and stand just above the trees, when the eye can trace the beautiful Cumberland River in its windings for at least one hundred miles, and may distinctly mark the junction of its tributaries, in a direct line, for thirty miles." "On top of this mountain," he wrote, "lays three chalybeate springs. These waters, combined with the purity of the atmosphere, proved to be of immense benefit to invalids who resorted there for their health. It is believed that, in the hands of an enterprising proprietor, the springs would soon become a place of great resort. The elevation of the mountain, which is 1,745 feet above sea level, and the consequent purity of the atmosphere, the beauty and magnificense of the scenery and prospect daily presented to the eye of the visitor, combined with the medicinal virtues of the water, a good host, and intelligent and refined association, would make these springs a most desirable point for a summer excursion."

According to "Kentucky: A History of the State (Battle, Perrin & Kniffin, 3rd ed., 1885), sometime after that, such an enterprising proprietor by the name of Joseph Perkins, did in fact own a resort atop the mountain at the springs. Perkins was a farmer and extensively raised and sold livestock. This book also says that Perkins also engaged in the distilling business and owned a hotel and mineral springs near Albany.

A Chalybeate spring, (pronounced Cle'bit), is a name given to a mineral spring which contains salts of iron in quantities sufficient to be of some therapeutic value. These salts are usually the carbonate and the sulphate.

In the book, A History of Kentucky - Embracing Gleanings, Reminiscenses, Antiquities, Natural Curiosities, Statistics and Biographical Sketches of Pioneers, Soldiers, Jurists, Lawyers, Statesmen, etc., (1872), author William Allen wrote that the three chalybeate springs "have been visited a great deal over the last twenty-five or thirty years and have proved a great benefit to invalids."

A geological survey of Poplar Mountain, taken in 1888 by R. H. Loughridge, showed iron, lime and magnesia carbonate, silica, potash and soda salts in minute quantity. The summary revealed it was a weak chalybeate water, good of its kind.

According to the WPA Guide to Kentucky (Federal Writers Project's American Guide Series written in 1939), "On a foot trail that follows the old overgrown carriage road to the summit of Sewell Mountain, here is Rehobeth Springs, a watering place of the early days, near three chalybeate springs. Before the War between the states, the springs were visited by many invalids, who proclaimed numerous benefits and cures. From the top of the mountain, on a clear day, the surrounding country is visible for a distance of about 75 miles."

According to "Report" by the Kentucky Department of Agriculture Labor and Statistics (1908), "There are chalybeate springs on Sewell Mountain, a high plateau northeast of Albany, the county seat, where a view of the surrounding county for several miles can be had, which gives great pleasure as the scenery is so varied. A hotel has been erected and pleasure grounds laid out, which makes the place very inviting, as it is perhaps the coolest summer resort south of the Ohio River."

Another book, Historical Sketches of Kentucky by Lewis Collins of Maysville, Kentucky, published in 1850, also talks about the hotel and mineral springs.

On his 73rd birthday in 1908, J.C. Bristow wrote about visiting the top of the 'great Poplar Mountain' and about a little log cabin and two women living there. He wrote, "There is a medical spring and father's second wife and another woman are there for their health." He wrote about "looking down on the old ranch, upon the great scene where the youthful wonders of my father were displayed. And there on my right is a large sugar (?) orchard and between it and the house lies what was called the poplar field. I remember lying down on my back one day in that field. I looked west and I wondered what was far away in the west. I did not know then but I understand it all now."

In "Every Creeks A Story in Clinton County Hill", originally published in the 1930s, Howard Hardaway wrote, "Next morning, I started north, leaving to my right Sewell Mountain with it's mineral springs near the top, an ideal location for a summer resort or, best of all, for a youth hotel."

Today, for the most part, all that is known is that the hotel and mineral springs did exist. The hotel foundation is still there. Perhaps one day more information will surface and we can have stories regarding its existence.