Dode Dowell lived from 1858 to 1911 and was one of the most colorful characters ever in these parts. Short in stature with dark hair and leathery skin from the outdoor live he lived, Dode, whose real name was Duard Belmont Dowell, sported a droopy mustache and wore his hair parted low on the side to cover a scar left by brass knucks some long forgotten foe had once hit him with. Dode had a reputation for being a dangerous man in combat but he wasn't a mean man. He didn't look for trouble, but he didn't run from it either.

His farm on Adam's Fork Creek, better known as Mell Ridge, was mostly an orchard. The fruit was used in brandy making and neighbors hauled fruit away in five barrel wagons for their own use at no charge. A government employee was always present at the making of the moonshine and also at the withdrawal of whiskey from the bond house. Occasionally, Dode would be arrested for selling whiskey illegally, but nine times out of ten he was found not guilty. He also appeared in court numerous times on firearms charges, disturbing the peace and so on.

There are many stories about the life of Dode Dowell, but the one most told begins with Fannie Buckner, Dode's first wife. She was pregnant with their second child when Deputy Marshall Bill Stotts, entered their home one day threatening to kill Dode. The young Mrs. Dowell was so frightened by his threats that she suffered a miscarriage and then died herself a few days later. Believing his wife's death was entirely the fault of Stotts, Dode sent word that if he ever met him he would kill him.

Dode didn't go looking for Stotts. As a matter of fact it wasn't until four years later that the two met. The date was May 16, 1887. The place was inside the courthouse at Edmonton, Kentucky. Court was in session when Dode spotted Stotts on the courthouse steps. The May 25, 1887 edition of the Hart County News described the ordeal in detail...

"Bill Stotts of Three Springs this county, while attending court at Edmonton last Monday, was shot and killed by an unknown person. While circuit court was in session about 3 o'clock in the evening a report of a gun or a pistol was heard and immediately thereafter Bill Stotts was seen falling down the stairs into the courtroom, blood gushing from his mouth and ears. Upon examination it was found that he had been shot in the center of the back, the ball passing entirely through his body. He died within a few moments without speaking a word. Roy Rutledge a young man who was upstairs and who had in his possession a Winchester Rifle and a pistol was arrested and jailed but it is not known whether or not he is guilty. The grand jury began to investigate the case and it is reported that a well known citizen of the county saw the killing and recognized the person who fired the shot. Stotts was on trial at Edmonton for shooting Bill Slinker's eye out some time ago. About 3 o'clock it is said that Dode and Tom Dowell, Rutledge and Hiram and Tom Pendleton were upstairs in the large room immediately over the courtroom and someone who does not seem to be known, came partly down the stairway and beckoned to Stotts and that the latter went up the stairway to the room above. Immediately the noise was heard with the shot, followed by Stotts rushing down the stairway mortally wounded. It is believed that the person in the room above decoyed Stotts upstairs for the purpose of killing him. They are the noted Dowells of Green County and their adherents. It is said the Dowells have been engaged in the manufacture of whiskey illicitly and that Stotts who has been in the Revenue Service, has given them trouble. Stotts seems to have been a bad man, but with all of his faults it looks as if he has been most foully murdered. Two of the Dowells and Rutledge have all been indicted for murder, The Dowells escaped while Rutledge is still in jail....the Dowells are desperate men and justice probably lost the only chance it ever will have of getting it's hands on them when they walked out of the courthouse after killing Stotts."


"The grand jury at Edmonton last week returned indictments against Dode and Tom Dowell, two brothers named Pendleton and Roy Rutledge for conspiring together and killing Bill Stotts of this county in the court house of that place on Monday week. From the latest information received it seems that George Bushong an old gentleman from Rock Bridge, Monroe County, who had been upstairs in the County Judge's Office on the same floor where the tragedy occurred, came out of the judge's door just in time to see one man slap Stott's face, another hit him with his fist, a third kick him and as Stotts ran and was trying to escape down the stairs, still a fourth man shot him. The shot was fired from a pistol and not from a Winchester rifle as first stated. A Winchester was however found upstairs but had it's full complement of loads, 16, in it. Stotts himself had come to town with a goodly supply of arms in his wagon, a small arsenal in fact, but he seemed to have had no weapons with him when killed. Judge George R. Price the County Judge, also saw the shooting. He had been in his office with Mr. Bushong and was just coming out of the door too, when the shot was fired. He says Dode Dowell is the man who fired it, and as he did so and saw Judge Price had witnessed it Dowell shook his head at him. The pistol used was a Colt 44 and the ball passed clear through Stotts body and through several partition walls. Although only the Dowells, Pendletons, and Rutledge have been indicted Slinker and Johnson are suspected of being in the conspiracy to kill Stotts. Rutledge was the only one arrested the others making their escape, and it is said, have sent word to the sheriff of Metcalfe that he need not come after them as he will not get them. Rutledge is now in jail, and there have been rumors afloat that the Dowells and others would make an attempt to rescue him."

In the confusion immediately following the shooting Dode descended the courthouse stairs and slipped outside, where he mingled with the crowd and got away. It's not clear whether he voluntarily surrendered or was captured, but according to old newspaper accounts the prosecution of his case began in December of 1887 and continued until 1890, when Dode Dowell was found not guilty.

2011 will be the 100 year anniversary of the passing of Dode Dowell. His legend will last forever, or at least as long as there is someone to tell the stories and someone to listen. The Colt 44 used to kill Bill Stotts is a highly sought item by collectors. 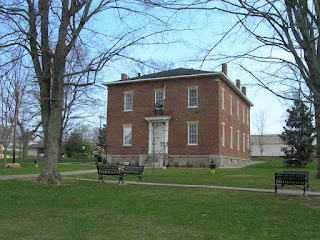 Pictured above is the old Metcalfe County Courthouse at Edmonton, where Dode Dowell killed Bill Stotts in an upstairs room.
at September 01, 2010