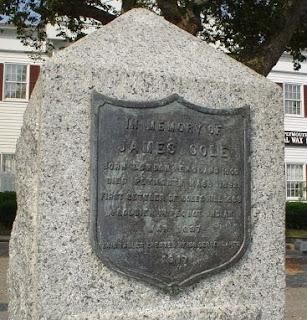 James Cole was an innkeeper who came to America in the 1630's with his wife and four children and settled at Plymouth Colony. James was the first settler to live on Cole's Hill.  The site is named for his son, John.

According to Pilgrim Hall Museum, America's Museum of Pilgrim Possession, virtually all the historic sites relating to the earliest period of the settlement at Plymouth in 1620 have lost their original character and convey little impression of the colony. One exception is Cole's Hill. The view from the hill of land and harbor and sea conveys a vivid impression of the scene that greeted the Mayflower's weary passengers.

The hill was the traditional burial place of the Plymouth colonists, Pilgrims, and others, who died during the tragic first winter of 1620-21. The dead were reportedly buried at night, and their graves disguised to prevent the Indians from learning the dangerously weakened state of the survivors. In later years, the colonists occasionally mounted cannons on the hill to ward off possible attack from the sea.

Today, Cole's Hill is maintained by the Pilgrim Society as a public park. On its top stands the memorial to the Mayflower Pilgrims. At the foot of the hill is Plymouth Rock, the legendary landing site of the Pilgrims and stepping stone to the New World. Whether or not the Pilgrims actually landed on the rock, it has deep meaning for most Americans. Cole's Hill, the nearby rock, and the curving shores of Plymouth Bay memorably evoke the time more than three centuries past when Englishmen came to the shores of New England to stay.


Just outside my church, Clear Fork Baptist Church, is a burial ground and in the far lefthand corner of that burial ground, near the back of the Church, is where several members of the David Mason Cole family are buried.

He was born in 1777 in Washington County, Virgina and died here on March 4, 1861 at the age of 83. Shortly before the year 1800, he married Remember Woolsey of France. They had five children: Martha, Rebecca, James, Sampson and Sarah. Not much is known about Remember, except that just before the War of 1812, she and her family crossed the Cumberland Mountains from Virginia into Kentucky and settled along Clear Fork Creek. Remember died young, at the age of 33. David went on to became a prosperous farmer and stockman. On June 11, 1817, he purchased a 130 acre tract across the creek from Clear Fork Baptist Church from Alexander Beaty. It was there, near the current site of the Church gymnasium, that David built a large house. He eventually became a prominent landowner as the 1837 tax list shows him owning 540 acres on Spring Creek, and other lots elsewhere.
at September 02, 2010