A casinghead gasoline explosion that occurred September 27, 1915, at Ardmore, Oklahoma, was the deadliest and most destructive of any up to that time. Casinghead gasoline, or natural gasoline, is collected from natural gas at the casinghead of an oil or gas well. Casinghead gasoline production held an important place in Oklahoma's early petroleum development, and by 1913 forty natural gasoline plants existed. Placing the gas under high pressure converts the gasoline in it to a liquid state, but this extremely volatile substance must stay at around 50F or it will expand and change back to a gaseous state. The product was generally shipped to refineries by rail.
On September 26, 1915, a railroad car carrying casinghead gasoline arrived in Ardmoreat the Atchison, Topeka, and Santa Fe Railway depot. There the car was left until it could be taken to a nearby refinery. The next day the temperature quickly rose, activating the car's pop-off valve, designed to release gas pressure. Gas began to pour out and into the low-lying areas of downtown Ardmore. The train conductor refused to move the car because of a fire at a nearby asphaltum plant. The Ardmore Refining Company then sent a representative, who removed the dome from the top of the car, filling the air with gas and vapors. At 2:20 p.m. on September 27 an explosion, triggered by an unidentified source, destroyed most of downtown Ardmore.

Many people were injured, and forty-three people were killed. A district grand jury and a local coroner's jury found the Santa Fe Railway at fault. Citizens formed a committee that took claims and then presented them to the railroad officials. More than seventeen hundred claims were filed, and $1.25 million was paid.

The attorney responsible for the settlement of these claims was a native of Clinton County. His name was Samuel Thomas Bledsoe.

Samuel Thomas Bledsoe was born in Clinton County on May 12, 1868, the son of Elijah and Ottilla G. Snow Bledsoe. After attending some school in Clinton County, he was enrolled in a private school at Jamestown, Kentucky, and later, the Southern Normal School and Business College at Bowling Green. He also studied law under the direction of Tom Brown of Brown and Bliss, Sherman, Texas, who later became Chief Justice of the Supreme Court of Texas. Bledsoe attended the University of Texas in 1888 and 1889. He taught school in Clinton County in 1885 and in Cumberland County in 1886. He moved to Grayson County, Texas in 1887. In 1890, he was admitted to the practice of law at Sherman, Texas. On May 1, 1890, he moved to Ardmore, Indian Territory, and began practice of law there. And, on July, 1912, was appointed General Attorney of the Santa Fe at Oklahoma City.

Although there was grave doubt of the Santa Fe's responsibility for damage resulting from the explosion, that Company on Bledsoe's recommendation offered to assume liability to all claimants who would agree to submit their claims to arbitration by a Committee of Ardmore citizens to be selected by the Mayor of Ardmore in case they were unable to agree with the Company as to the amount to be paid. Notwithstanding there were many hundred claims, only one suit was filed, the claimant recovering much less than he had been offered. 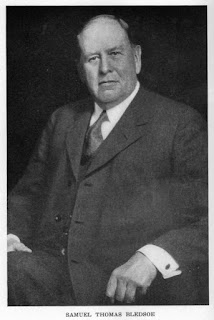