On November 27, 1862, James Parrett enlisted in the Civil War. He joined Company H of the 28th Tennessee Infantry at McMinnville and achieved the rank of Sargent.
A collection of letters that James wrote to his wife, Mahala, during the war were handed down over the years and eventually became the property of Doris Parrett Williford, James and Mahala's great-granddaughter. The letters chronicle the inner struggles James experiences while being away from his wife and children during the war, and how he uses his faith to see him through the ordeal.

This letter was written after the fall of Atlanta on September 4, 1864. Both armies had fought almost non-stop for a total of four straight months on the road to Atlanta. James Parrott reflected on his good luck and the blessing of God in protecting him from harm. The tenor of Parrott's voice showed his war weariness.

I have the opportunity of seating myself to write you another letter to let you know that I am well and I hope that this letter will find you and my sweet little boys and Lety all well, and I hope that this will find all the rest of my kinsmen and friends all well. I want to see you all so bad that I cant hardly stand it. I hope and trust to God that the time is not far distant that I will get to come home and live in peace the remains of our days. May God speed the time. Dear companion, I can say to you that I have been in all the battles since the battle of Murfreesboro and I was in the battle of Chickamauga and at Resaca and at Darsville, New Hope Church, Kennesaw Mountain, Peachtree Creek, Stone Mountain and at Jonesborough. I have been in all those battles and through the blessing of God I have never been touched with a bullet. I thank God for it. God has been my shield and I hope that He will be until I die. What has been the cause of him being my friend - I have ask him for his blessing. You wrote to me that you had prayed for me. I do believe that God has answered your prayer, for he has blessed me in everything, and I request you to continue to ask God for to extend his blessings toward us as a family. If we shall never see each other again in this life I hope that we will meet in heaven where there is no war but peace forever. Tell John and Thomas to be good boys and mind their mother till their pap comes home, and to learn to read and to spell. I want to see you all so bad that I cant hardly write so that you can read it. You must excuse all mistakes and bad writing. I want you to kiss Robert for me and tell him that is from Pap. I want you to write to me just as soon as you get this, or as soon as you can, and write to me about how you are getting along and all about how my friends is getting along, and tell them to write to me and give me all the satisfaction you can. Mahala Ann, I have wrote you two letters before this one. I sent them by the way of Richmond, by flag of truce. I am fixing to start in the morning through the lines with a flag of truce to exchange prisoners and I expect to send this letter through the lines by some prisoner and get him to mail it.

When you write I want you to send me some United States stamps, and when we get a communication open I want you to write once a weak so I can get them regular. I want to know if the mail route is open to Gillilands at the Oak Hill Post Office. I send my letters to Burkesville, Kentucky, in care of Alen or Olen Gilliland. Inquire for letters every chance you have. I saw Elvin Moredock sometime back and he said that he was writing home. I want you to get Uncle Thomas Moredock to look for my letters and get them to you. I aim to write every chance I have as I can't get to see you. I hope to hear from you. It would do me more good to hear from you than anything else as I can't get to see you. I oft times think of that sweet babe that I kissed the morning I left home. God bless his heart. I want to kiss him today and you to. Hala Ann, I want you to pray for me and tell all my Christian friends to remember [me] in there prayers. Pray to God to give us peace and stop the sheding of blood. Governor Brown of Georgia has set Thursday the 15 of September for fasting, humiliation, and prayer. I hope it will prevail much. Dear wife I shudder to think of your troubles when your little children asleep you are awake. I am in this war. I don't know when I can get out of it. You had rather have me a brave man than for me to be a coward. Wife, you do not want me to run risks of coming home and take [protection in the wild]. I could write a great deal more but I am not allowed to, so I must close by saying I remain your husband until death. Goodbye for this time. Lety, I want you to write to me and tell me who is your sweatheart.

This letter is pretty much a repeat of the conclusion of Letter #8. James further reflects upon his good luck and blessings from God. War weariness again crept into this letter. At the time, both armies in Georgia were taking a much needed breather. General John Bell Hood had lost Atlanta, but was certain that Union General Sherman had traveled too far from his base of supplies at Nashville. General Hood planned on traveling northward to cut the railroad between Sherman's Atlanta-based army and the main supply depot at Nashville. This would have caused Sherman to retreat back to Nashville and give up Georgia and Middle Tennessee. Anyway, that was Hood's plan.

I, this sabbath morning, seat myself to write you one more letter to let you now that I miss the land of the living and well, and hope that this will reach you and find you and my sweet children all well and doing well. I want to see you all powerful bad. I want you to write me as soon as you get this and give me all the satisfaction you can and send me some United States postage stamps, for I want to write to you often if the communication can be open. I have been in several hard battles, but through the blessing of God I have never been touch with a bullet. God has been my shield and I hope he will be till I die. You wrote to me that you had prayed for me. I believe that God has answered your prayer. I want you to still ask God for his blesing and tell all of my Christians friends to remember me in their prayers. I am not allowed to write much. You can write to me all about your affairs. I have to close. Direct your letters to Chatham Division, Wrights Brigade, 28 Tenn. Regt. So, I remain your husband until death. Kiss Robert for me. Tell John and Thomas to be good boys till their pap comes home. Good by for this time.

On November 30, 1864, James was in the front ranks in the attack upon Union positions at Franklin, Tennessee. He was shot in the lower right foot breaking the metatarsals. James was left at a Confederate hospital while the rest of the army went on to Nashville. After the Confederates were routed at Nashville, Union forces captured James around December 17, 1864. His foot was amputed by Union doctors on December 26, 1864 at Nashville. He was sent to a prison in the Louisville on May 6, 1865. On June 16, 1865, he swore to the Oath of Allegiance and was paroled.

After the war James and Mahala Ann farmed in the Rock Springs area of Overton County. James created his own wooden leg. He made it a habit of tying it to the saddle of his horse as he rode. On May 6, 1868, the horse came back to the house alone, with his wooden leg still attached to the saddle. The family found James dead from a gunshot wound. He had been murdered. Suspected of being the murderer, Mahala's brother disappeared the very same day and was never heard from again. James was buried at Officer Cemetery. Mahala never remarried. She died in 1908 and was buried beside her husband. 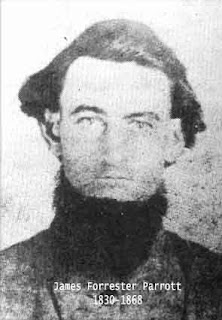 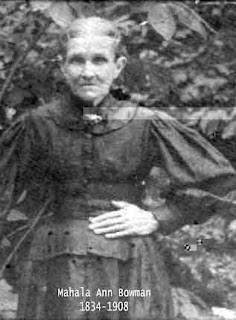 This concludes The Parrett Letters.
at August 04, 2011