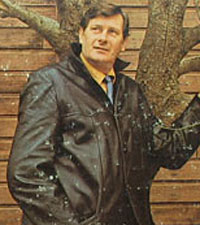 Country singer Jack Barlow has died at the age of 87. Barlow passed away Friday, July 29, after a battle with a lengthy illness. His success in the music business began in the 1960's. Between 1964 and 1965, Barlow co-wrote three songs with my father. They were produced by the legendary Buddy Killen and released on Dial Records. The first of those releases, ‘I Love Country Music (But I'd Rather Fight Than Switch),’ which made it to #21 on Cash Box the week of September 28, 1965. Barlow sang the song on the stage of the Grand Ole Opry on November 8, 1965. The song was a take off of the Tareyton cigarette commercials, which featured men and/or women models sporting a black eye and delivering the line "I'd rather fight than switch." The songs that dad co-wrote with Barlow were produced by the legendary Buddy Killen. 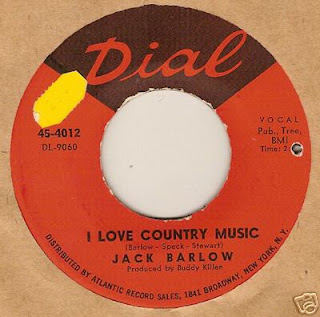 The flip side of the record was another of the songs that Jack co-wrote with my dad and others. It was called Number One In The Nation. Barlow's second single release with Dial Records was Dear Ma. Side B was the third and last collaboration between Barlow and Speck,  I Love Her Still, as in "I don't care if she's a moonshiner's daughter, 'cause I love her still.

Barlow got his start in entertainment as a radio DJ after serving in the Navy during WWII. In the 1970's, he switched creative gears a bit, penning jingles for the Big Red brand of chewing gum. He also continued to traffic in the food and beverage world, taking on voiceover work for a panoply of corporations like Dollar General, Kraft and Kellogg’s. He also did voiceovers for car companies like Chrysler and Dodge.

Barlow is survived by Dianne, his wife of 24 years, along with several children and grandchildren.
A public memorial for Barlow is scheduled for August 13, from 5-9PM CT. It will be held at Harpeth Hills Memory Garden Funeral Home, which is located at 9090 Hwy. 100, Nashville, TN, 37221.

I Love Country Music also had live with another recording artist. Rockabilly legend Hayden Thompson of Booneville, Mississippi, just a few miles north of Tupelo where Elvis was born, recorded a 45 r.p.m. record, a cover of Junior Parker's Love My Baby, at the legendary Sun Records in Memphis. But, his timing was ill-fated as interest in rockabilly was beginning to fade in favor of 'newer' sounds. So, in 1958 Thompson moved north to Chicago.  to Chicago. In the late summer of 1965, Thompson walked into WJJD-Am in Chicago and recorded two songs. Side A was I Love Country Music (And I'd Rather Fight Than Switch. Side B was Ain't It Funny How Time Slips Away, written by Willie Nelson, which turned out to be one of the all-time classic country hits. In 1986, the two songs were included on an album Hayden Thompson released on SunJay Records, entitled Early Days. Dave Travis, who wrote the liner for the album said, "The Willie Nelson classic could almost have been a 'Sun' cut as could the "Hot' side "I Love Country Music," where (Johnny) Cash would have been proud of the sound." The songs were "forgotten about" as the album liner says, until years later when Hayden included them on the Early Days album (SunJay 1986).
Thompson took a break from music for a while in the 70s and went to work for driving a limo. When he discovered his rockabilly songs were big overseas, he went back into music and headed for England for several appearances. Today, Thompson lives in Chicago with his wife and occasionally performs.