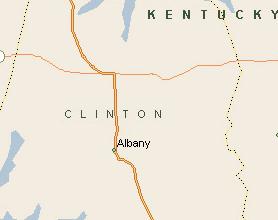 "It is the perfect place to settle," is what Thomas Stockton must have thought when he was the first to arrive here in 1798. Stockton had built one of the first grist mills in the Smokey Mountain area of Tennessee, but when the new land east of the Green River opened in Kentucky, he packed up and headed north. As he crossed over Cumberland Mountain and stood on a spur of that elevated platform, later to be called Poplar Mountain, he surely must have been overwhelmed at the beauty of what lay before him...an area he named Stockton's Valley, later to be known as Albany.
There has never been a shortage of heroes in Clinton County.

Many of the first residents of Stockton's Valley were young adults. Most were either soldiers of, or sons and daughtes of soldiers of, the American Revolution. They were just a few short years removed ancestors who were of french, english, irish or german descent. They were proud to be Americans and they were eager to begin new lives in a new territory.

It was the fall of the year when the call for volunteers went out at the outbreak of the War of 1812. Because of their background, there was no question that residents of Stockton Valley would be first in line to eagerly take up arms to defend their country once again. On August 31, 1813, Company 53, led by William Wood of Stockton's Valley, reached Newport, and the company's 47 men, including 36 rank and file, 11 commissioned officers and nine rifles, prepared for battle as they crossed the Ohio River at Cincinnati, and headed for Lake Erie. On October 5, 1813, General Harrison and his forces crossed over into Canada where they fought and won the decisive Battle of the Thames. It is said William Wood was present when Richard M. Johnson killed Tecumseh. The soldiers of Stockton's Valley returned home on November 13th. They had left their home and families to defend their country, and had returned as heroes.

There are many other heroes in Albany and Clinton County; farmers, teachers, business leaders, pastors and Church folk, and every single one of them have done their part, or are still doing their part to make our little community what it is today....a great place to grow up and live and raise our children. And, while some are called to leave home and make their mark somewhere else in the world, they are still proud to call Albany and Clinton County home. I proudly salute those who have come before us, and those who are still out there doing what they do every day to make my town the GREAT place that it is today.

When I was growing up, there was a large sign out by the hospital that read: "Welcome to Albany - Home of 2,000 Friendly People. The fact that the increase hasn't been so great is not what matters. While the faces of people may come and go, what counts is there is always going to be plenty of 'friendly' people around.
at August 15, 2011