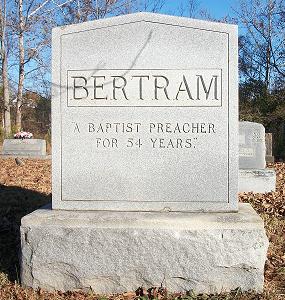 The Bertram family that were a huge part of Clear Fork Baptist Church in Albany, Kentucky from the late 1890's through the 1930's, originated in England and came to Virginia during Colonial times. As a young man, William Bertram, a preacher, migrated to Wayne County. Pleasant Hill Church in Wayne County was started very near the Bertram home. His son, Jonathan, also a preacher, became a large landowner in Wayne County and, likewise, was a preacher.

One of Johnathan's sons was Alvin Bertram. In 1865, near the end of the Civil War, Alvin moved to Clinton County, where he continued his family's tradition of being a farmer. He soon followed in his father and grandfather's footsteps by accepting the call to preach, which he did for 54 years, mostly as pastor of Clear Fork Baptist Church.

There were four pastors of Clear Fork prior to Alvin Bertram; Isaac Denton, 1802-1848, Daniel Hancock 1849, James Abston 1852-1854 and Joseph Denton 1854-1886. Following the death of Joseph Denton, Bertram was selected as pastor for one year, beginning in November of 1887. J.C.J. Selvidge served as Pastor for the next seven months before Bro. Bertram was asked to come back. The Church apparently loved him so much that in February of 1898, after 11 years, when Bro. Bertram asked to be released as pastor, the Church refused, and he remained pastor until his death on July 14, 1926 at the age of 79. His last regular sermon at Clear Fork was on July 26, 1924. Assistant pastors' J.R. Hagan and James Fairchilds filled in during those last two years, with Bro. Fairchilds being chosen the next pastor in 1926.

Besides being a preacher and a farmer, Alvin Bertram also enjoyed politics. He represented Clinton and Wayne counties as a Kentucky State Representative during the 1894 and 1898 sessions.

Alvin married Rosa Young on May 12, 1864. They had six children: William, Elza, Joe, Oscar, Printus and Lena. All of them followed in their father's footsteps, either as a farmer, a preacher or in politics. Printus became a preacher. As a matter of fact, he served as Clear Fork's 10th pastor, from May 1932 to May 1933. He died in 1936 at the age of 59. His brothers, Elza and Oscar, practiced law in Albany for nearly 25 years as Bertram & Bertram before moving the practice to Monticello. In 1910, Elza ran for congress, but lost. Later that year, he was elected to the Kentucky State Senate. In 1933, he became a Judge with the Kentucky Court of Appeals.

Both Alvin and Rosa Bertram are buried at Albany Cemetery. 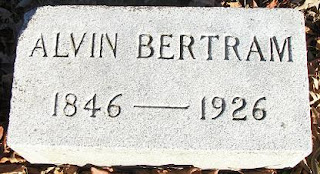