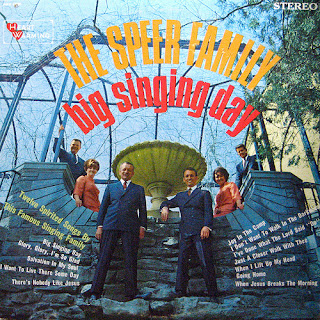 I wish I had seen this earlier.

On March 6, 2012, a popular gospel music blog, Southern Gospel Views From The Back Row, rated the Speer Family's 'Big Singing Day' LP as the groups' number one album. That makes me smile because two Albany boys wrote that song, my dad and Gene Coulter. And, not only did the Speer Family record the song, they made it the title of their album!

The Southern Gospel Views From The Back Row blog regularly publishes a 'Ten On Ten' feature and the March 6, 2012 blog highlighted the the Speer Family, which has always been referred to as 'first family of Gospel music.' Mom and Dad Speer (George and Lena Speer) started singing in 1921. Eventually, the article states, all the kids would be a part of the group and Brock and Ben Speer would go on to spend their entire singing careers with the Speer's.
The blogs writer, Steve Eaton, wrote "In trying to determine the Speer Family’s pinnacle recording, it came down to the top four. Big Singing Day, from 1968, ended up at #1. Brock and Ben Speer along with Harold Lane, Ann Downing, Jeanne Johnson and Bob Johnson were members during the time of this recording. Some of the best singing from the Speers was found on this recording. "There’s Nobody Like Jesus", "Salvation In My Soul", "When Jesus Breaks The Morning", "Joy In The Camp", "I Don’t Want To Walk In The Darkness" and "Going Home" all highlight this album."

What excites me about this article is Big Singing Day beat out the 1971 album The King Is Coming, which ended up at #2. The Speer Family were the group to popularize the Bill and Gloria Gaither's classic song. It became a signature song for the group and many groups would go on to record the song over the course of the last 40 years.

Thanks Southern Gospel Views From The Back Row for recognizing an album that my dad had a part in, The Speer Family's Big Singing Day. Click PLAY below to listen to dad's group, The Gospel Servants, sing Big Singing Day....