It doesn't take long for a kid who's bought a guitar and is jamming away in the basement to figure out that all he needs is three chords. Or, let me say that another way: If you are a kid who has bought a guitar, head to the basement, or the bedroom, and learn the three chord arrangements...the I, IV, V's of music, and soon you will be on your way to music bliss. Nothing's wrong with complexity if that is what you're into, but the wonderment of it all is when you learn those three chords, like G, C and D, E, A and B, or C, F and G, and and soon you find yourself with tons of material.

What's so hard about three chords? Nothing, well it's a bit more complex than that, but consider all the famous musicians down through the years who succeeded with just three chords, four at the most. That takes in just about every single artist or band that's ever strung up a guitar, through all decades and music genres. AC/DC built a career around three chords. So did Willie Nelson and the Everly Brothers, not to mention Bob Dylan, Johnny Cash and that band from Liverpool -- The Beatles. And, consider that little ol' band from Texas, ZZ Top...same three guys, same three chords.

Country songwriter Harlan Howard said all you need is three chords and the truth, though Woodie Guthrie claimed that if you play more than two chords, you're showing off. Seriously, looking back on music during my lifetime, there are so many out there who went through twenty-five years, eighteen albums, fourteen tours, nine number ones and three chords. From Elvis to James Brown, the Ramones, Patsy Cline and on and on, right through today's musicians, it's as easy, or as hard, as three chords.

I am self-taught and mostly play by ear. I can remember when I first caught on to it. Finding the major chords led to the discovery of minor chords. I would play one, then the other. The difference was clear, and it was also amazing. It was a HUGE discovery, and when I wondered why my three chords did not sound like the three chords on the record, I stumbled upon inverted chords (the different ways to play one chord) and instantly a whole new and exciting world opened up for me. Suddenly, my chords sounded like the record. And, of course, when I discovered all the above, I discovered vocal harmony. Sitting at that old piano on our back porch, that was a great day, hahaha. I LOVE music! 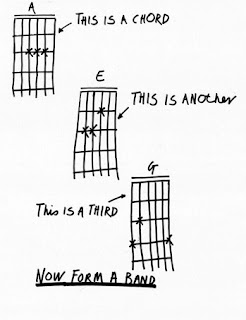