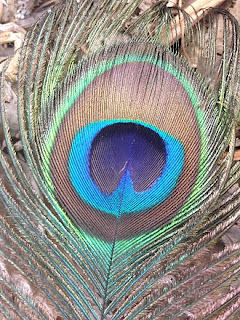 Growing up, my family lived on a farm at Wago, Kentucky for 25+ years. For most of those years, a family of peafowls lived in the woods just behind our home, nesting on the ground but roosting in the trees. Even though technically the male is properly called a peacock, the female a peahen, and the immature offspring a peachick, to us they were simply, peafowls.

Sometimes more than one of the beautiful birds would come into our yard. They were always aware of us and would keep a safe distance. As small children, us kids spent a lot of time trying to chase those things down. If one of us ever succeeded, it was very, very rare.

Eventually, we left them alone for fear they would stop coming around us. It was almost as if they were our pets, like a dog or a cat. They shed plenty of their feathers in our yard, so we always had a nice collection.

Occasionally, one would venture onto the front porch to catch a glimpse of its reflection in the glass door. They would spread their wings and rotate in a circle, proudly showing off their magnificent beauty. Sometimes, one might see its reflection in the bumper of one of the vehicles parked in the driveway and would spread its wings and rotate round and round in the front yard.

Many mornings, we would waken to the sound of a peacock running to and fro on our rooftop. Always, it was way before we wanted to wake up. I guess they thought if they were awake, everyone else should be, too.


One thing we discovered real soon after moving to the farm, Not only was a peafowl proud, it was also LOUD! It always happened during mating season, when we would hear it. AH AAAAH AH! several times in a row, then a break, followed by more AH AAAAH AH's! There was never an advanced warning that the 'scream' was about to take place. It would definitely hard to sleep during it. What made even more alarming was the natural reverb sound attached to each scream, thanks to the hollow wooded area where the peafowls lived. Sometimes more than one peafowl would scream at the same time. It would rival any sound coming from the stereo speakers in our cars parked in the driveway. It was something you could not ignore. The first of the screams always got your attention, like the rock quarry blasting without any advanced warning. Thankfully, for our sake, love for the peafowl was seasonal. It would begin in the early spring and sometimes continue well into the summer... it was all night, every night. Along with the raucous screams, the peafowl also made other noises that were less ear-piercingly offensive. One in particular was a honking sound, like that of a goose, which the bird usually did when confronted by something, or in our case -- someone! 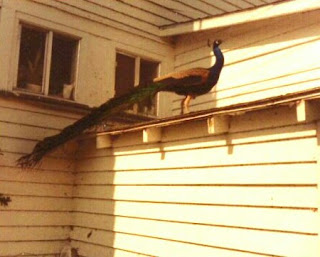 The peacock you see in the photo above often found its way to that very spot outside the kitchen windows. My brother, Ronnie, would open the window and feed it loaf bread and Pringles potato chips. He thought that was a big deal and always laughed about it. The rest of us did, too! I think that's why I've kept this photo around all these years, after he was killed in the automobile accident in 1981. He died so young, and so long ago now that some of the memories are slowly fading. Thankfully, this photo helps me to recall a childhood that included him.

Supposedly, the lifespan for a peafowl is 23 years. Eventually, after many, many years, we stopped seeing or hearing the peafowls that lived on that farm with us. Whenever I recall those happy days, filled with much fun and laughter as a child growing up on that farm, I always remember those peafowls, proud and loud, always running around, strutting their stuff, always several steps ahead of one of us, always screaming. Always screaming. Those were good days.