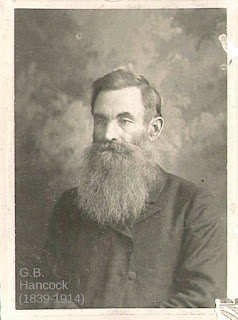 Golman Buford (G.B.) Hancock was born in 1839 in Wayne County, Kentucky and died in 1914 in Stone County, Missouri. After his death, a collection of his handwritten notes describing his life was passed down to his offspring and published in a booklet entitled, "My Life is an Open Book." It is about the struggles of a boy being left alone in the hills of Gap Creek in Wayne County following the deaths of his parents. As you will see, G.B. loved and greatly adored his father, Benjamin. As a way of introduction, G.B.'s grandfather had been a soldier in the Revolutionary War and for his service, received a grant for land at Gap Creek. He was reportedly the second settler in the region after Thomas Stockton (at Irwin). G.B. was one of ten children.

"At an early date my father erected a water mill on his farm, which did the grinding, or most of it, for the neighborhood. He was a farmer, miller, justice of the peace and a Baptist preacher. He never attained notoriety as a preacher, but was a man of considerable influence. When a difference would arise in the neighborhood all appeared to be willing to leave it to Uncle Ben, as he was known. He had no concern so far as the goods of this world were concerned, beyond a reasonable supply of food and raiment.

He was a friend of the poor, the widow and orphan. He raised four orphans and looked to the extent of his ability after objects of charity. I heard in my childhood how many such objects have died in his house, but do not now remember. We will know after awhile when the books are opened.

The house was a hewed log house, covered with chestnut shingles, when nails were not to be had. The shingles were pinned to the laths. When not quite four years old, my mother died. Our father had to tend his mill, superintend the farm and attend his meetings. Neighbor women were kind, but we were a family of neglected ones. It was a good farmer in those days that could afford biscuits for breakfast on Sunday mornings. For that reason, uncle John Hicks did his part to help us more than any one person. He had a grown daughter, and, looking for a wife, my brother often went to the Hicks' residence. We were always rejoiced when brother went to see her, for she would fill his coat pockets with biscuits for us children.

Before I reached my thirteenth birthday father was called to go. He called me his boy baby. He was old and feeble, and was only sick about two days. In the evening before he died at night he asked for his lips to be moistened. I got some water and a rag and wet his mouth. He then fixed his eyes upon me, and with an effort that called for all his strength, he prayed for the blessing of God to rest upon his boy. Those were his last words. 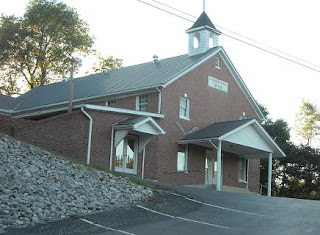 My father was a very indulgent parent. I had been his constant companion. The Creek Baptist meeting house was built on father's land. Gap Creek was between our residence and the meeting house. Father was old and tottery. In crossing the creek and climbing the hill, upon which the meeting house stood, he would brace himself on his right side with his cane and on the other by resting his left hand on my shoulder. Whenever I was with him, I was a happy boy, whether on the road, the farm or about the little water mill. After his death, I missed his kind counsel, his words of encouragement and above all, his caressing love."

(According to records, Benjamin Hancock deeded land to Otter Creek Church for $2.00 an acre, "which includes the meeting house now occupied by its members, lying on the waters of Otter Creek.") 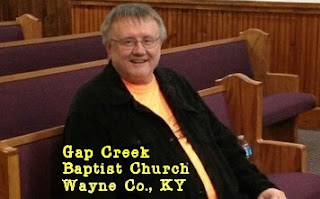 I was saved during a revival at Gap Creek Baptist Church. In the photo, I am sitting on the very pew where it happened. It was the very front pew on the left side. It was a hot August night in 1968. Little was I to know that when the preaching started it was going to get a lot hotter. Bro. Ora C. Jones preached a fiery message on hell that night. He was only standing a few feet from me. It looked like his face was on fire and the longer he preached, the more on fire it looked. My eyes were transfixed on the sight of him. I could not move. It was almost more than a 9-year-old boy could take. I began to think two things were going to happen. Number one, fire was going to spew from his mouth and, number two, his head was surely going to lift up off his neck at any moment. I remember thinking he might explode. Occasionally, his eyes would find mine. I wanted to cry out. I wanted to run, but I could not. How could it be that I, whose only purpose in life was playing basketball or baseball, or riding a bicycle, was doomed to go to the fiery lake the preacher was describing. The longer I sat there, the worse it got. I did not realize at the time that I was under the conviction of the Holy Spirit. I was sure that I did not want to go to this place called hell and I sure did not want to burn in a lake of fire for ever and ever. At the invitation, the preacher barely got the words to come out of his mouth, when I found myself at the altar. 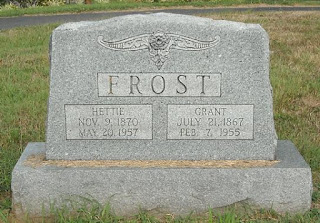 Gap Creek Baptist Church will always remain dear to my heart. How great it is to me that God would save me inside a building where my ancestors worshipped. My great-grandfather, Ulysses S. "Grant" Frost is buried in the cemetery there. His name obviously means that someone in his family served or supported the Union cause. That someone was his father, and my great-great-grandfather, Corydon "Cord" Frost, who was a Private in Co. H, 13th Kentucky Calvary from Dec. 1, 1863 to June 10, 1865. Cord is also buried at Gap Creek. 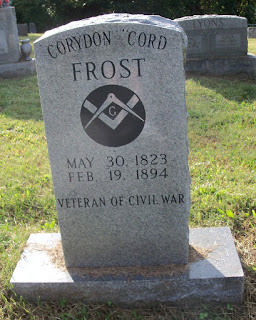