The Civil War: Family On Both Sides

Like most people, I had family members on both sides during the Civil War. Two ancestors on my maternal side were murdered by Champ Ferguson, the confederate guerilla who terrorized citizens along or near the border of Kentucky and Tennessee. This short story highlights two of my ancestors who fought on opposite sides.

My maternal third great-grandfather, John Boles (left in the photo), was a captain in David Beaty's Independent Scouts. His wife, Matlida, was Tinker Dave's sister. Before the war, John served in the Tennessee state legislature from 1851 to 1857, as both senator and state representative. He enlisted with Tinker Dave in 1862 and served until the war's end in 1865. Afterwards, he was Overton Co. sheriff from 1865 to 1867.

My paternal third great-grandfather, Pleasant Hillary Ledbetter (right in the photo), was a Corporal with Co. F, 16th TN Infantry. At Camp Trousdale, he took measles, which affected his throat and lungs. That and the freezing of his right foot to the bone during the march to Huttonsville, Virginia in the winter of 1861, wound up permanently disabling him later on. Eventually, he was captured near Loudon, Tennessee and was given a choice of either going to prison or taking the oath of allegiance to the U.S. government. Being in bad health, he chose to take the oath. His pension was denied. 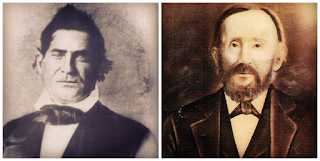