The Night They Drove Old Dixie Down

"These old men would say, 'One of these days the South is going to rise again.' I didn't take it as a joke. I thought it was really touching, that these people lived this world from the standpoint of a rocking chair." 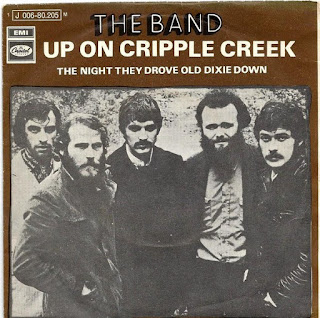 "The Night They Drove Old Dixie Down" by The Band was released by Capitol Records on September 22, 1969 as the B side to, "Up on Cripple Creek," which was the title track on their second album by the same name. It was written by the group's guitarist, Robbie Robertson.

The lyrics tell of the last days of the American Civil War, the winter of 1865, and the suffering of white Southerners. The Confederate states are starving and defeated. Confederate soldier Virgil Caine served on the Danville train (the Richmond and Danville Railroad, a main supply line into the Confederate capital of Richmond). Union cavalry regularly tore up Confederate rail lines to prevent the movement of men and material to the front where Robert E. Lee's Army of Northern Virginia was overtaken at the Siege of Petersburg. As part of the offensive campaign, Union Army General George Stoneman's forces tore up the track again. The May 10th date refers to the date Confederate President Jefferson Davis was captured, the definitive end of the Confederacy.

Robertson claimed that he had the music to the song in his head but had no idea what it was to be about. Band mate Levon Helm took him to a public library and he began researching the civil war, and that is where the song was born.


"When I first went down South, I remember that a quite common expression would be, "Well don't worry, the South's gonna rise again." At one point when I heard it I thought it was kind of a funny statement and then I heard it another time and I was really touched by it. I thought, "God, because I keep hearing this, there's pain here, there is a sadness here." In Americana land, it's a kind of a beautiful sadness."

"I went from Toronto to the Mississippi Delta, and...I liked the way people talked, I liked the way they moved. I liked being in a place that had rhythm in the air. I thought 'No wonder they invented rock 'n' roll here. Everything sounds like music...and I got to come into this world, a cold outsider - cold literally from Canada...and because I didn't take it for granted, it made me write something like "The Night They Drove Old Dixie Down." These old men would say, 'One of these days the South is going to rise again.' I didn't take it as a joke. I thought it was really touching, that these people lived this world from the standpoint of a rocking chair." (Copyright, Peter Viney)

In 1969, Ralph J. Gleason wrote in Rolling Stone magazine: "Nothing I have read has brought home the overwhelming human sense of history that this song does."


Virgil Caine is the name
And I served on the Danville train
Til Stoneman's cavalry came
And tore up the tracks again
In the winter of '65
We were hungry, just barely alive
By May the 10th, Richmond had fell
It's a time I remember, oh so well

Back with my wife in Tennessee
When one day she called to me
"Virgil, quick, come see
There goes Robert E. Lee!"
Now I don't mind choppin' wood
And I don't care if the money's no good
Ya take what ya need and ya leave the rest
But they should never have taken
The very best

Like my father before me
I will work the land
Like my brother above me
Who took a rebel stand
He was just eighteen, proud and brave
But a Yankee laid him in his grave
I swear by the mud below my feet
You can't raise a Caine back up
When he's in defeat