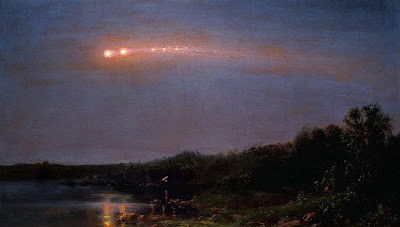 1860 was the year of comets and meteors in the United States. Four comets were discovered, one of which was to the naked eye from mid-June through July. The first meteor fell on May 1st near New Concord, Ohio.

A very rare event occurred on July 20th when an earth-grazing meteor, a meteor that moves nearly horizontally through the Earth's atmosphere, nearly parallel to the earth's surface, passed from Lake Huron near Buffalo, New York across Greenwich, Connecticut and out over the Atlantic. Meteor processions are so rare most people have never heard of them. There have only been four: 1783, 1860, 1876, 1913.

And then on August 2nd, a magnificent meteor appeared from Pittsburgh to New Orleans, and from Charleston to St. Louis, an area of 900 miles in diameter. Several observers described it as being larger than the full moon, and just before it's disappearance, it broke into several fragments. A few minutes after the flash of the meteor, there was heard throughout several counties in Kentucky and Tennessee a tremendous explosion like the sound of a distant cannon. Immediately, another noise was heard, not quite so loud, and the sounds were re-echoed with the prolonged roar of thunder.

From a comparison of a large number of observations, it was computed that this meteor first became visible of northeastern Georgia, about 82 miles above the earth's surface and that it exploded over the southern boundary line of Kentucky at an elevation of 28 miles. The length of its visible path was about 240 miles and the time of flight eight seconds, showing a velocity relative to the earth of 30 miles per second, and was this computed that it's velocity relative to the sun was 24 miles per second. 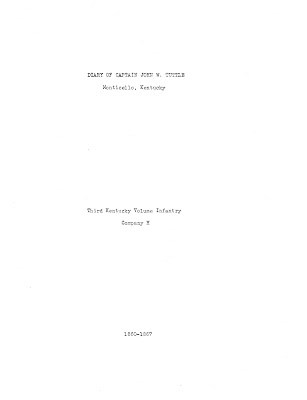 "Thursday, August 2, 1860:  Dr. J. B. S. Frisbie, W. A. Haskins and myself were sitting in the porch when all at once a meteor of the most intensely brilliant character arose in the Southeast, rising in its course at an angle of about 20 degrees, and moved with an apparently slow motion towards the Northwest.  Its light was of a peculiarly white character more brilliant perhaps than that of the sun. It completely blinded, for a moment, all who beheld it.

After the meteor had disappeared, I walked down town to learn the sentiments of the people generally with respect to the strange visitor. The matter was being discussed freely and many opinions expressed with regard to it. The savants differing among themselves displayed a depth of research into the hidden mysteries of physical science truly astounding. Illustrious examples shining forth from the page of history should have taught them the folly of attempting to tamper with the staid orthodoxy of the common mind to popular opinion.

The theory finding favor with the greater number was that the "last day" of the existence of this little ball of dirt had most certainly arrived. Some minutes after the disappearance of the meteor a sound, deep and unnatural, not unlike the rumbling of heavy thunder, in the distance, when near the earth but partaking of the roaring nature more like the roaring of a whirlwind. The sound continued for several minutes and gradually died away, greatly to the relief of those regarding the sound as the herald of an earthquake or judgment day."

In the Aug. 13, 1860 edition of The New York Times, Dr. Alex McCall of Rome, Tennessee said "the sounds were like hundreds of wagons running over bridges. The first sounds came from it when near to us, resembling powder explosions in open space, but the remotest sounds came five to ten minutes afterward. The intensity of the blaze made me spring from bed, supposing a fire had broken out, and on reaching the window, shadows were glancing in every direction.

'Caroline' said the moon had fallen and was burning up; 'Nick' said 'the fire ran into my eyes and woke me up; and 'Isaac,' jumping, asleep, from the ground, insisted the world was on fire. Then came the sounds like a great bass drum pelted by some giant, keeping time. In its rapid flight the meteor cast off thousands of sparks at every explosion, and then flashed bright as the sun, confusing the eye and causing the leaves and grass to appear purple; finally splitting into two meteors as it expired." 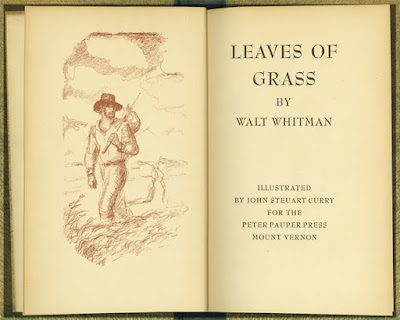 Though the meteor procession of 1860 garnered much public attention, it was mostly forgotten by the 20th century, perhaps overshadowed by the tremendous events of the Civil War that followed, but Walt Whitman and the thousands of other people who saw the meteors, and the rare meteor procession witnessed something truly special.

Nor the comet that came unannounced out of the north, flaring in heaven,

Nor the strange huge meteor procession, dazzling and clear, shooting over our heads,

(A moment, a moment long it sail’d its balls of unearthly light over our heads then departed, dropt in the night and was gone)

John Tuttle's diary spans his social and family life before the Civil War, his time serving in the Union Army's 3rd Ky Vol. Infantry, Co. H during the war, where he saw action at the battles of Shiloh, Lookout Mountain and Atlanta, and the post-war when he returned home to his legal practice in Monticello, where he presided over the bankruptcy court for almost 50 years. Tuttle and his wife, Mollie, had several children. He was born in 1837 and died in 1927 and is buried at Elk Spring Cemetery.