Fats Domino was one of the most influential rock and roll performers of the 1950s and 60s. Best known for "Ain't That A Shame," "Walkin' To New Orleans" and "Blueberry Hill," he had 30+ Top 40 hit singles and sold more than 65 million records, outselling every 1950s rock and roll act except Elvis Presley. His million-selling debut single, "The Fat Man," is credited by some as the first ever rock and roll record.

Fats Domino was one of the first rhythm and blues artists to gain popularity with a white audience. Elvis Presley referred to him as "the real king of rock n roll" and Paul McCartney reportedly wrote the Beatles song "Lady Madonna" in emulation of his style. In 1986, he was among the first inductees into the Rock and Roll Hall of Fame.

Antoine "Fats" Domino Jr was born in New Orleans on Feb. 26, 1928, the son of a violinist. He said clean living kept him in shape. Righteous thoughts were his secret, and New Orleans home cooking. His parents were of Creole origin, and French Creole was spoken in the family. Domino left school at the age of 14 to work in a bedspring factory by day, and play in bars by night. He was playing piano in honky-tonks as a teenager when bandleader Bill Diamond said the youngster's technique reminded him of two other great piano players, Fats Waller and Fats Pichon. He was 17 when he made his first record in 1949.

In the mid-1940s, he joined trumpeter Dave Bartholomew's band. Those two co-wrote many songs. A lot of people think Fats wrote 'Blueberry Hill' but he didn't. While his version of the song is best remembered, Fats claimed the song was written in 1927 by Larry Stock and Al Lewis. It was recorded several times in 1940's, by Sammy Kaye Orchestra, The Glenn Miller Orchestra, Gene Autry, Jimmy Dorsey, The Glenn Miller Orchestra and Louis Armstrong. Domino's version was included on his 1956 album, "This Is Fats Domino!" on Imperial Records. It was an international hit which became a rock and roll standard. Domino's version ranked #82 in Rolling Stone magazine's list of the 500 Greatest Songs of All Time.

So, how great was Fats Domino?

Rolling Stone magazine listed him at #25 in the list of 'Greatest Recording Artists of All Time.' The magazine said: "After John Lennon and Paul McCartney, Fats Domino and his partner, Dave Bartholomew, were probably the greatest team of songwriters ever. They always had a simple melody, a hip set of chord changes and a cool groove. And their songs all had simple lyrics; that's the key. There are no deep plots in Fats Domino songs: "Yes, it's me, and I'm in love again/Had no lovin' since you know when/You know I love you, yes I do/And I'm savin' all my lovin' just for you." It don't get no simpler than that."

If there had never been a Fats Domino, Gary Larson would have never produced my all-time favorite Far Side piece. 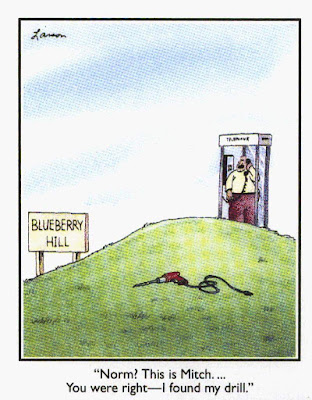