Shelby Coffey Had A Good Name Before The Rebellion

Shelby Coffey was born in Wayne County, Kentucky on Dec. 1, 1832, the son of Manerva Alexander Coffey. "The Coffey's were wealthy and influential people," wrote John Allen Brents in his Patriots and Guerrillas book. Coffey was elected to Kentucky Legislature in 1859 and served during the 1860-61 session. He stood very high among the members of that body. Brents wrote that like many other youths in Kentucky, Coffey was misled by political tricksters. "He had a good name before the rebellion, but the curse of the rebellion blighted his character." Specifically, Brents, who was a Union Major for the Kentucky 1st Cavalry during the Civil War, wrote that Coffey was corrupted by Congressman James Chrisman of Wayne County. In 1861, Coffey joined the Confederacy and was Captain of Company H, 6th Ky Volunteer Cavalry. This company was partly organized in Wayne County on January 18, 1862. Organization was completed at Livingston, Tennessee. Records state that Capt. Coffey was wounded in an apparent skirmish that occured in Clinton County, Kentucky on January 16, 1862. He went home to Wayne County, where he died on March 20th. He is buried at Elk Springs Valley Cemetery on Kentucky Highway 92 East in Wayne County, not to be confused with Elk Spring Cemetery in town. It is a small cemetery with mostly Coffey Family and people that married into the Coffey family. 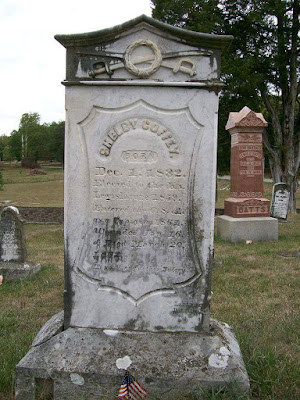