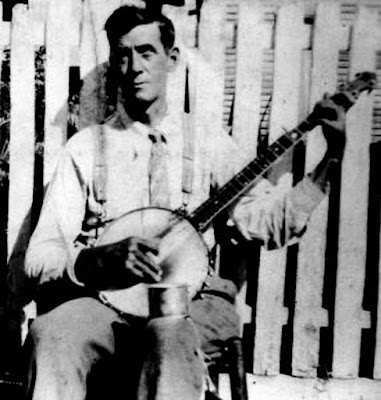 In his youth, he worked as a logger and wheat thrasher, then a driller and tool dresser in the oil fields. His grandparents were of German and English descent and that ancestral influence was instrumental in forming a musical career for him. By age seven, Burnett was playing the dulcimer; at nine he was playing the banjo and at thirteen he had learned to play the fiddle.

One evening in 1907, Burnett was walking home from his job at a barbershop at Stearns, Kentucky when he was robbed at gunpoint by a railroad tramp. Rather than lose his money, he rushed the robber and was struck in the face by a shotgun blast, leaving him blind. Unable to work at the barbershop, he decided to become a musician to earn money for his wife and small child. He began traveling from town to town playing on the street for nickels and dimes with a tin cup tied to his leg. When he could afford it, he took the train, sometimes he’d walk.

By 1909, he was traveling all over South, entertaining at fairs and schoolhouses, and became known as Blind Dick Burnett and the “Blind Minstrel of Monticello." By 1913, he had earned enough money to publish a book of ballets, a collection of song lyrics written on paper. It included “The Lost Ship” about the Titanic sinking of 1912, “The C & O Railroad,” “The Reckless Hobo,” The Jolly Butchers,” which he claimed sold 4,000 copies, an autobiographical, "Song of the Orphan Boy," which was later recorded but not released, and the semi-autobiographical "Farewell Song," with its opening line "I am a man of constant sorrow." Burnett is credited with writing the song, but never recorded it. The melody was based on an old Baptist hymn, “The Wandering Boy.” 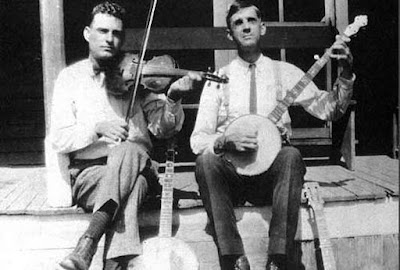 By 1914, Burnett had found a 14 year old boy, Leonard Rutherford, to accompany him on his travels. Rutherford was born in Somerset, Kentucky but lived most of his life in Monticello. When the two first met, Rutherford was learning to play the fiddle. Burnett was willing to teach him if Rutherford would help him get around. It was the start of a 35-year partnership.

As Rutherford improved, it became profitable for the two men to branch out and thus, they began to travel by horse, bus and railroad. Eventually, Burnett bought a car, which Rutherford learned to drive. It allowed them to travel, in Burnett's words, "from Cincinnati to Chattanooga, playing every town this side of Nashville." 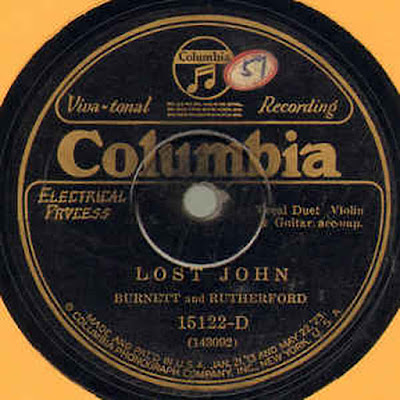 In 1926, Columbia's A&R manager Frank Walker was prepared to record more southern musicians, and invited Burnett and Rutherford to a "field recording" session in November at a temporary studio in Atlanta.

At this first session Burnett and Rutherford recorded six sides, which were issued in 1927 as three 78 rpm records and sold very well. The best seller of the three, "Lost John," sold 37,600 copies in three years, an astonishing figure for that market at the time. Profitable as the records were for Columbia, Dick and Leonard received only sixty dollars per side and their expenses. But, Dick Burnett did find a way to profit from their records. He bought many copies wholesale from Columbia and sold them at his performances, just as he had previously sold his ballets and songbooks.

Burnett and Rutherford were invited to the Columbia's next Atlanta sessions in April and November 1927. The ten numbers included Dicks' autobiographical, "Song Of The Orphan Boy," which was not issued, and a version of "Hesitation Blues," "Danville Girl," "All Night Long" and "Wilie Moore." 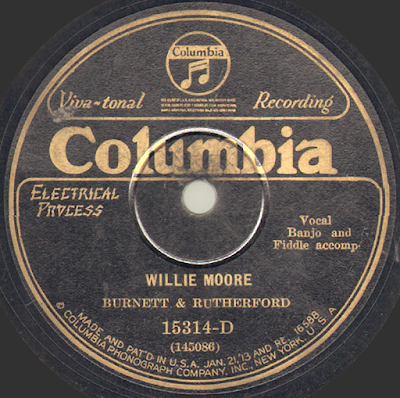 The next year, dissatisfied with their payment they broke from Columbia and recorded with Gennett Records. This involved travel to the Northern recording studio, but Gennett's base in Richmond, Indiana was more accessible from Kentucky than those of other Northern record companies. Newly partnered with guitarist Byrd Moore, they recorded five sides in October 1928, including "Cumberland Gap" and "Under The Pale Moonlight." 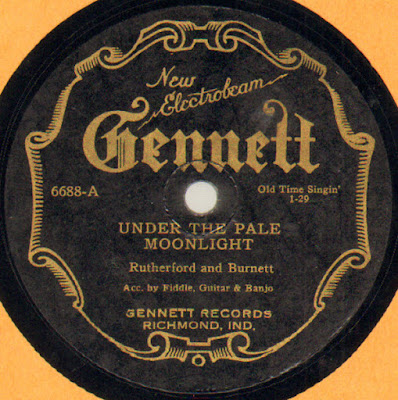 In 1973, Burnett, who was still working as a chair maker at the age of 90, claimed that he and Rutherford initially recorded because a furniture store owner at the Bonnie Blue Coal Camp in Virginia wanted to sell records made by them. They recorded some of the classic sides in old-time music, and their popularity on records kept them recording steadily throughout the 1920's. Their appeal on radio allowed them to broadcast from places like WLW in Cincinnati and the Renfro Valley Barn Dance. They traveled by bus, Model A, and on foot to any place they could and sing. From about 1914 until 1950, the pair became so popular that they found themselves in the company of most all the popular mountain musicians of the time. They were "at home" in the presence of greats like the Carter Family, Charlie Oaks, Arthur Smith and many others. 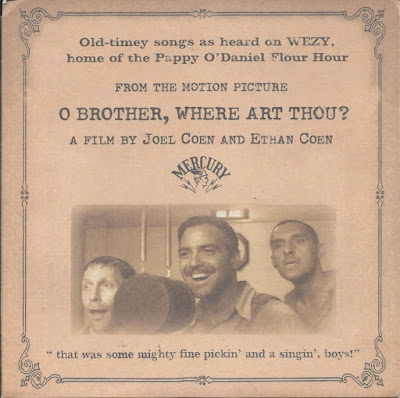 In 2003, “Man of Constant Sorrow” was voted the 20th greatest song of all-time in CMT’s 100 Greatest Songs in Country Music. The song appeared in the 2000 film O Brother, Where Art Thou?, under the title "I Am a Man of Constant Sorrow." Performed by the fictitious Soggy Bottom Boys in the movie, it was recorded by Dan Tyminski, Harley Allen, and Pat Enright. It was a hit in the movie for the Soggy Bottom Boys and later became a hit single in real life. It received a CMA  award for "Single of the Year" and a Grammy Award for "Best Country Collaboration with Vocals" and it peaked at #35 on Billboard's Hot Country Songs chart.

When asked about “Man of Constant Sorrow,” a song he called “The Farewell Song” that appeared in his 1913 songbook, Dick Burnett replied, “It might be my song, I dunno.”

Rutherford died in 1954 from complications related to epilepsy. Burnett died in 1977.

In "Country Music Originals: The Legends and the Lost" by Tony Russell (2007), country music historian Charles Wolfe had a number of opportunities to interview Burnett during his field trips to Kentucky in the 1970's. During once such interview in 1971, Burnett said "There was a man down here in Clinton County where I used to drill for my wife's brothers in the oil fields. I was raised in the mountains a mile and a half from where they was raised and they knowed what a hard time I had had all my life, that I had worked hard all my life. Now i'd go down to Albany to play and there was an old man, Old John Upchurch, lived on the road there, said he wondered what that Dick Burnett was doing ridin' up and down that road so much fur. And, this Mrs. Bennett, friend of mine, said "Why, he's going down there to put on an entertainment. He's a blind man, can't see to work now, he's trying to make a living." And he said, "He never worked when he could see. He never was no 'count, wouldn't give a nickel for the lot." So, she told me about it and I said, "Well, I bet he ain't gonna get away with it none. I'm gonna have it anyhow." He claimed to be religious and he had a barrel of wine in his cellar, and he's go down in there and get so drunk that he couldn't get back upstairs. He'd go to the Davis Chapel (Church) up there and he'd shout and his wife would shout and pray. And, I made a song about it and sung it."


Come all you rounders if you want to hear
Story all about a revival held here
Rounder Windy was the speaker's name
Up in Davis Chapel where he won his game
"I made a long song about it and I sold three hundred of them on song cards, all around him down there, and they'd sing 'em going to milk and goin' to feed and everywhere." In 1975, Rounder Records issued the first album devoted to the work of Burnett and several of his associates, including Leonard Rutherford, entitled "A Ramblin' Reckless Hobo." Acknowledged as a fine poet and songwriter, as well as player, the music of Burnett and Rutherford perfectly captures traditional American music at a point when it began to evolve into what would become commercial country & western music through the advent of phonograph records and radio stations.